Watch: Sambar Deer visits a tea stall. This is what happens next 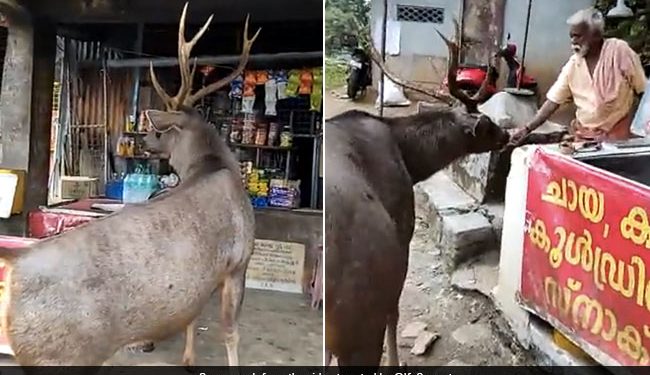 The Sambar deer was fed by the locals.

Animals like to live in their own habitat. But with population growth and adventurous tourists, hard-to-reach places are not easily accessible. This has led to more and more animals coming into contact with humans, which is sometimes dangerous. But on other occasions, such contacts make for memorable moments. Like a video of a Sambar deer visiting a tea stall and eating snacks. The clip was shared by Dr. Samrat Gowda, Indian Forest Service (IFS) officer, on Twitter.

The video shows a Sambar deer standing in front of a makeshift tea stand, looking at the food items there. A man, holding a food item, gestures the Sambar to step aside. The animal understands and moves in that direction.

If Sambar goes to a local hotel, what do they offer?
Seriously, getting wild animals into human habitation is not a good sign… pic.twitter.com/zMJOuWYWIZ

The man then offers him food, which the Sambar enjoys. The deer is still feeding from the man’s hand, as some of the tea stall attendees walk over to take a closer look.

A man is seen asking his friend to click his picture with the Sambar. He even touches his antlers. Another offers him tea, but the animal refuses.

The IFS officer shows concern about the food being offered to the animal. “If Sambar goes to a local hotel, what will they offer? Seriously, getting wild animals used to human habitation is not a good sign,” Gowda says in his tweet. He has not mentioned the location where the video was shot, but it is believed to be in India.

The Sambar is a large deer native to the Indian subcontinent and Southeast Asia. It has been listed on the IUCN list as a vulnerable species since 2008.

According to Encyclopaedia Britannica, the sambar lives in forests, alone or in small groups.

Video: Maharashtra girl jumps out of car to escape harassment

“Terrorism cannot and should not be linked to any religion”: Amit Shah

"Terrorism cannot and should not be linked to any religion": Amit Shah