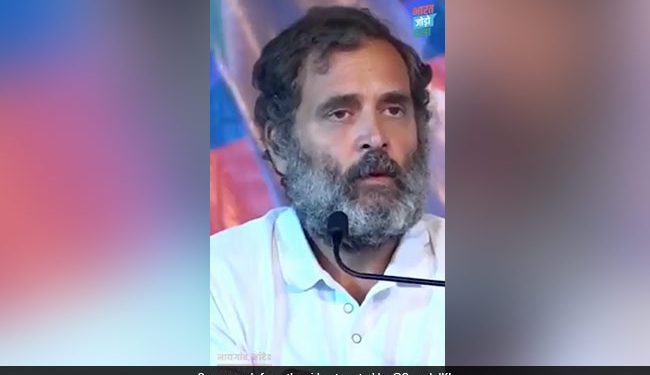 Spread love and brotherhood in the country, not hate, Rahul Gandhi said.

Congress leader Rahul Gandhi on Thursday asked the country’s young generation to be fearless against all adversities and refrain from spreading hatred that divides the nation.

“Daro mat (don’t be afraid)”, he replied sternly when asked about his message to the new generation of the country. The former congress president’s comments came in Nanded in Maharashtra, during his rural Bharat Jodo Yatra.

Daro Mat…….Shri @RahulGandhi message to the youth and the nation.#BharatJodoYatrapic.twitter.com/diyX70S193

Gandhi clarified that he was not referring to Prime Minister Narendra Modi or the Rashtriya Swayamsevak Sangh (RSS), the ideological mentor of the ruling BJP.

“Never be afraid of anything in your life. If you are fearless, you will not hate anyone. Remove fear from your heart and work for the country,” he said. Spread love and brotherhood in the country, not hate, Gandhi added.

“You cannot show your love for the country by dividing it. On the one hand you salute the national flag and on the other hand you make brothers fight each other – this is not patriotism. This weakens the nation,” he said. .

In addition, the congress leader also targeted the BJP-ruled central government over the 2016 demonetization of high-value banknotes and the Goods and Services Tax (GST).

Mr Gandhi said his foot march was directed against what he called the BJP’s policy of “spreading fear and hatred,” PTI news agency reported.

The Bharat Jodo Yatra, which started on September 8 from Kanyakumari in Tamil Nadu, will cover a distance of 3,750 km and will end in Srinagar in January 2023. The foot march entered Maharashtra on Monday evening.

Leaders of Sharad Pawar’s Nationalist Congress Party, an ally of Congress in the former Maha Vikas Aghadi government in Maharashtra, and Bollywood actor Sushant Singh joined Gandhi on his foot march in Nanded on Thursday.

Chief Opposition Ministers vs. Governors: What’s the Way Out of the Ugly Struggle?