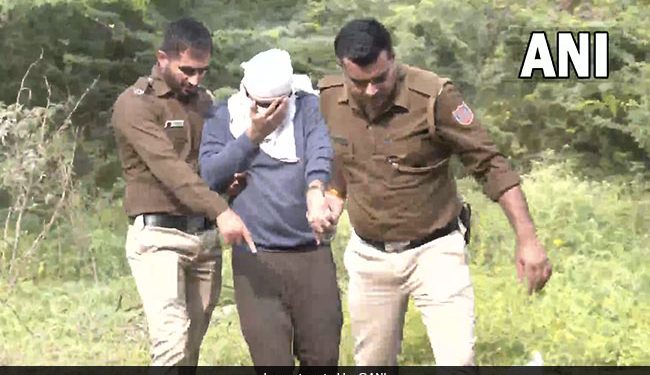 Shraddha Walker Murder: Aftab Poonawala was taken with his face covered with a white cloth

Delhi police today took the 28-year-old accused of killing his live-in partner to the jungle areas of South Delhi’s Chhatarpur, where he allegedly dumped her body parts.

A senior police official said the accused Aftab Amin Poonawala will be taken to places in the city other than the Chhattarpur jungle area as part of their investigation into the murder.

Aftab Poonawala was taken to the forest with his face covered with a white cloth surrounded by police personnel. camera crews and journalists were also present.

A woman at the scene asked Aftab Poonawala if he was ashamed of his actions.

Aftab Poonawala had told the police during the investigation that he killed his live-in partner Shraddha Walkar after an argument over marriage and the idea of ​​chopping her body into 35 pieces was inspired by “Dexter”, an American crime TV series.

He bought a refrigerator to keep the body parts and always went out after midnight to throw them away. The suspects painstakingly planned which to remove first, depending on which part began to decompose at the earliest, police said.

According to police officials, 13 body parts were found after the suspect located the areas where he had thrown them, but only after their forensic examination can it be confirmed whether they belong to the same victim.

They have yet to find the murder weapon.

Aftab Poonawala and Shraddha Walkar had met through the online dating application ‘Bumble’. Later, they went to work for the same call center in Mumbai. But their families objected to the relationship as they belong to different religions, leading the couple to move to Delhi earlier this year, the officials said.

“Around mid-May, the couple had a heated argument about the marriage, which escalated and Aftab Poonawala killed her,” Ankit Chauhan, Extra DCP-I, South District, had said.

The suspect then cut her body into more than 35 pieces. He bought a 300-gallon refrigerator to hold the body parts and stocked up on incense sticks and room fresheners. He removed the pieces in different parts of the city over several days. always go out after midnight to dump the severed body parts,” he added.

Mr Chauhan said the woman was not in talks with her family due to their differences over her relationship with Aftab Poonawala.

The woman’s father’s complaint alleged that Aftab Poonawala had beaten Shraddha Walkar several times and that she informed her family about this earlier.

“The woman’s father called the suspect but was told that the couple had separated some time ago. Unable to contact his daughter, the man filed a missing person complaint,” Mr Chauhan said.

After receiving the complaint, Mumbai police traced her latest location in Delhi and also called Aftab Poonawala whose contradictory statements aroused suspicion, prompting them to snare the Delhi police.

“He earlier said that they lived in Chattarpur district of Delhi, but in May she left his house after an argument between them. When the police found a contradiction in his statement, they notified the Delhi police and gave all her details to them,” said a senior Mumbai police official.

On 8 November, the Mumbai Police reported the missing woman to Mehrauli Police Station. During the investigation, Aftab Poonawala’s residence was raided and he was detained.

“Initially he said they both had a fight and she left him. Later during a lengthy interrogation, Poonawala revealed that he and the woman had a live-in relationship since 2019. They quarreled regularly.

“On May 18, the defendant and the victim had some argument. She screamed which made him cover her mouth with his hand. He later strangled her, cut the body into parts and disposed of them in a nearby jungle area,” said a senior official of the Delhi police.

Aftab Poonawala has been sent to the police for five days.

The world’s ‘most poisonous plant’ found in British Garden flowerbeds