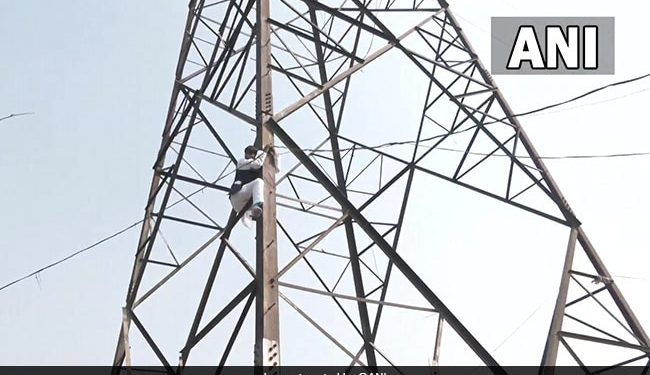 The AAP leader blamed the party and two other leaders if he falls and dies.

A leader of the Aam Aadmi Party (AAP) climbed a telephone tower on Sunday and went live on Facebook after not being selected for the upcoming Delhi Civil Body elections.

Haseeb-ul Hasan, a former councilor from East Delhi, clung to the tower because he claimed that AAP leaders Atishi and Durgesh Pathak did not return his documents.

The AAP leadership has yet to respond to the allegations.

By turning his camera to the ground to show how high he has climbed, Mr. Hasan blamed the AAP and the two leaders if he falls and dies.

“AAPs Durgesh Pathak and Atishi will be responsible if anything happens to me today, or if I die. They have my original documents, including my bank card. Tomorrow is the last day to submit nominations, but they will not give my documents to me, he said in the video.

He said he is not concerned about whether the party will put him in the civil elections, but he wants his documents back.

Mr Hasan had made headlines earlier this year with a dramatic sewer cleaning act. In March, he jumped into an overflowing sewage pit in Shastri Park to clean it. Standing up to his chest in the drain in a gleaming white kurta, Mr. Hasan was seen trying to remove the floating debris with a rake.

“Tears of happiness” in village in Ukraine after liberation from Russians

"Tears of happiness" in village in Ukraine after liberation from Russians