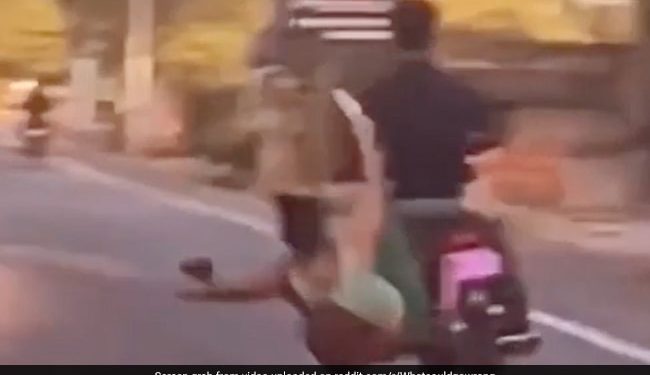 The woman loses her balance and falls off the bicycle.

We have all been warned by our elders that karma is catching up with us. Whenever we try to do wrong to someone, we naturally know that, we are warned that our karma will soon come back to us with consequences. One of those videos circulating on the internet shows a woman falling off a motorcycle while trying to kick a man riding a bicycle next to her. The woman was a co-driver on the other motorcycle, but could not keep her balance and fell on the road.

As the video begins, we see a man and a woman riding a pink bicycle while another person rides next to them. The woman then kicks the other driver, but loses her balance and falls onto the road instead. However, the driver of the pink bike does not realize it for a few seconds and continues on. A few seconds later he stops.

The video was shared on Reddit 18 hours ago and has 96 percent upvotes with over 46,000 likes.

It is not certain where the video was shot or whether the woman was injured or not.

Many users made comments about karma hitting her back. “INSTANT Karma,” said one user. “Hahaha haha ​​got what she deserved,” said another.

“That bag saved her, though,” said another user.

A few months ago, Indian Forest Service (IFS) officer Susanta Nanda shared two videos on the topic of karma. One of the clips showed a man trying to pull a camel’s tail. However, while trying to catch it, the camel kicks the unsuspecting man and makes him fall back. The IFS officer just wrote “karma” in the caption.