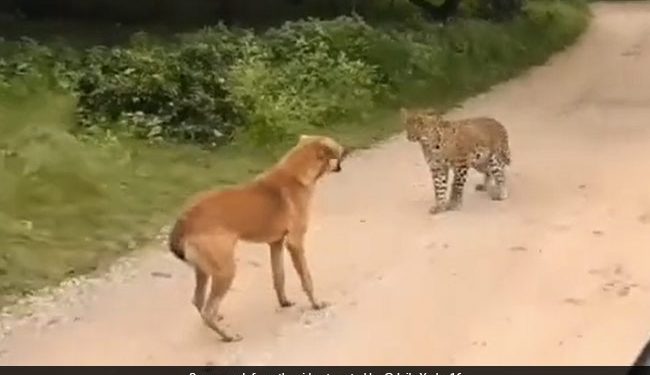 In the video, a barking dog chases a leopard away.

Usually feral cats attack small animals. But have you ever imagined a dog chasing a leopard away? It seems unrealistic. However, in a viral video circulating the internet, a stray dog ​​is seen doing just that.

The video was shared on the internet on Nov. 2 by Twitter user Jaiky Yadav. The video shows a dog resting on a road while a leopard tries to jump on it. Instead of running away from the situation, the dog puts on a brave front by barking at the leopard. The dog stands there, in front of the leopard, constantly barking furiously at him, leaving the leopard no choice but to go back to the jungle.

The caption of the post reads: “Agar ye darr jata, toh pakka marr jata (If he were scared, he would surely have died). Since the post was shared on the microblogging site, it has more than 1.17 lakh views and 5600 De 10 second viral clip also got a lot of user comments.

One user commented, “He’s scared, but he’s dared to protest out of fear, so he may have survived. It’s normal to be scared, but it’s wrong to stop fighting out of fear.”

“If a dog is feeling nervous or submissive, the dog will lower its tail and even put it between its hind legs. Here the dog is really scared or feels extremely submissive, to the cheetah. So the dog here is holding his tail tight pulled up against his stomach instead of,” commented another.

Attack is the best form of defense,” replied a third.

“For a leopard, killing a dog is not a big deal. Strange that he couldn’t complete his task,” commented a fourth person.

“Why are we here”: climate activists sidelined at COP27 summit

"Why are we here": climate activists sidelined at COP27 summit