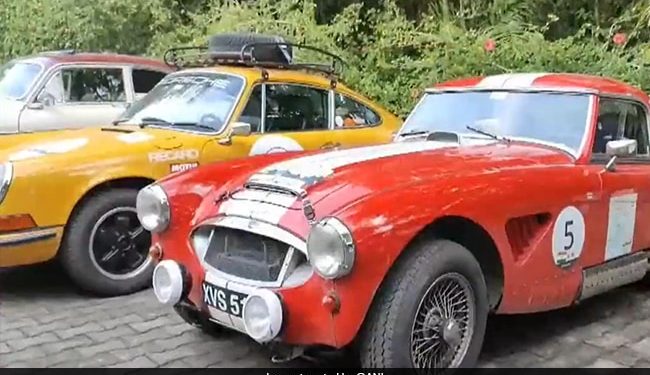 The clip garnered more than 10,000 views and hundreds of likes.

A mesmerizing video of a vintage car rally in Assam’s Kaziranga National Park is gaining popularity on social media. The short clip, shared on Twitter by news agency ANI, showed several old models of cars driving through the winding roads in the park.

In the tweet, ANI said 18 cars and motorcycles were included in the vintage car rally. The rally is organized by a group of European and African tourists. The old-timers will now stay in the National Park for two nights, according to the news agency.

#WATCH | Kaziranga, Assam: Vintage car rally with 18 cars and 2 motorcycles, organized by a group of European and African tourists, reaches Kaziranga and spends two nights in the National Park pic.twitter.com/C2MkLp6dNU

In the clip, old models of Porsche, Benz and several other cars were seen driving through the roads of Kaziranga National Park. The video also showed the vintage cars parked in style.

Since the clip was shared on Friday morning, the clip has received more than 10,000 views and hundreds of likes. In the comment section, while some users were just amused with the car rally, others jokingly asked when the Baleno car was part of the vintage car category.

Meanwhile, speaking of vintage cars, earlier this year photos of an old car converted into an electronic vehicle (EV) astonished internet users. Ador Digatron, a Pune-based specialist in energy storage, e-mobility and batteries, turned a 1954 Fiat Millecento into an electric motor. Digatron found the 1954 Fiat on a highway in a not so good condition, but decided to restore the car to its full glory and beauty.

Watch: The Moment When Imran Khan Was Attacked During Pak Rally