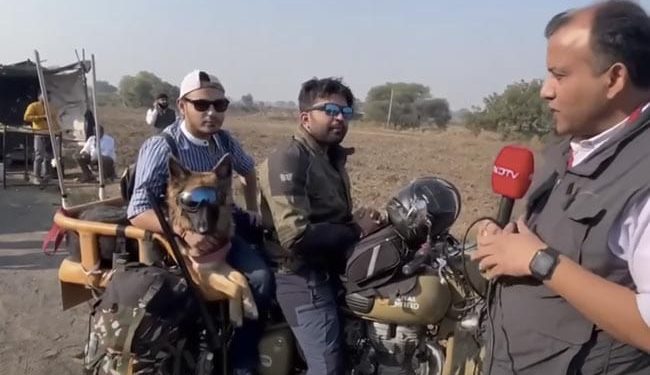 Two men and a dog named Marvel, on a bicycle, all set with supplies and tents, are now following Rahul Gandhi’s ‘Bharat Jodo Yatra’ as it continues through Madhya Pradesh to Rajasthan and finally to Kashmir, and they want to be heard. “We want to meet him and ask him about his views on animal welfare,” said Rajat Parashar, a Gwalior-based civil engineer who also works for stray dog ​​maintenance.

“I admire what Rahul Gandhi is doing. Such a Yatra resonates with young people as they too want to be able to take such a journey from Kanyakumari to Kashmir one day,” he added.

But what does Marvel, a 10-month-old female German Shepherd, do with them? “She is our companion in everything. We have trained her to travel with us. We have already traveled 10,000 kilometers, including Kashmir to Kanyakumari, the route that Rahul Gandhi travels the other way around,” said Parashar.

The back seat of his bike has a special cradle-like arrangement that allows another passenger and Marvel to sit comfortably. Marvel also has its own motorcycle goggles.

Why is it that he has to raise animal welfare with politicians? “When we travel, we see a lot of dead animals, most of them run over by vehicles. I’m sure there are ways to stop that. And in general, we want politicians to prioritize that,” said Mr Parashar.

On how they travel with Marvel, he also pointed out that not many hotels allow pets. “We either find a hotel that’s okay with it, or we stay in dhabas (traditional roadside huts with cots). If nothing else, we pitch our tent. Marvel likes to run around, so it’s also great fun for hair.”

But so far they have not been able to meet Rahul Gandhi, who happens to be a dog lover by his own admission.

“The security is too tight,” said Mr. Parashar, “They have been quite harsh with us. We understand why. But we hope we get a chance as we are now with the Yatra.”

The 3,500 km Yatra that started in September has completed about half of its route and will end in January.