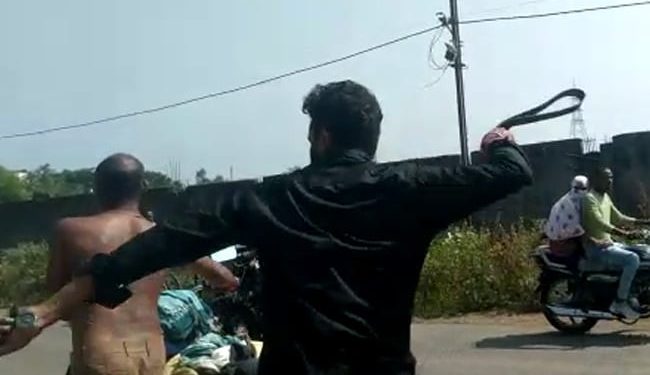 In a shocking case of mafia justice, two men were stripped naked and paraded and beaten with a belt for allegedly selling beef in the Bilaspur district of Chhattisgarh.

A video, now viral, shows the men, stripped down to their underwear, paraded down a street with a crowd following them. A man in the crowd whips one of the accused while others record the episode on their phones and some voices haunt him.

The two suspects have been arrested and police said more than 33kg of beef was recovered from them.

In a statement, police said a Sumit Nayak filed a complaint yesterday, alleging that Narsingh Das (50) and Ramnivas Mehar (52) were riding a two-wheeler loaded with a white bag. When the complainant and others asked them what was in the bag, they replied that it contained beef, the complaint said. Senior police officers were then notified and the two men were taken into custody, police said.

The statement states that 33.5 kg of beef has been recovered from the suspects and that they have been taken into custody. The two were presented in court today. Police have said the recovered meat has been examined by a veterinarian, but there are no details on the report of this investigation.

NewsMadura contacted senior police officers in the district but received no response. Nor is it known whether any action was taken against the men involved in undressing and beating the suspect in the street.

Rs 5,000 per month for workers affected by Delhi construction ban

Rs 5,000 per month for workers affected by Delhi construction ban