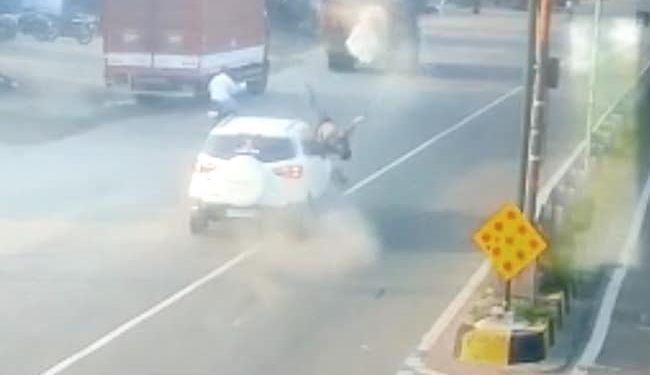 The accident was captured on CCTV footage.

A 23-year-old man on a two-wheeler was killed after a speeding SUV hit him on the Salem-Chennai highway in the Kallakurichi district of Tamil Nadu. The accident, which happened on Monday, was captured on cameras installed nearby. The motorcyclist was thrown into the air after being hit by Ford EcoSport while making a U-turn in Chinna Salem, but the motorcycle was dragged several meters.

Police identified the motorcyclist as Muthusamy from Madhavacheri village and said the accident happened when he returned after buying groceries. “The motorcyclist did not notice the seeding vehicle as he made a U-turn. The SUV was speeding. Muthusamy was not wearing a helmet,” a police officer told NewsMadura.

Venkatesan, the driver of the car, was arrested and then released on bail. He is from Pondicherry.

Police meanwhile say that an investigation is underway.

In September, two female software professionals were killed when they were hit by a speeding car while crossing the road in Chennai’s IT corridor.

S Lavanya and R Lakshmi, both 23, worked as analysts at HCL State Street Service. They were on their way home when a Honda City rammed into them.

The driver, Motheesh Kumar, was arrested. A senior police officer had told NewsMadura at the time that he was driving the sedan at a very high speed.