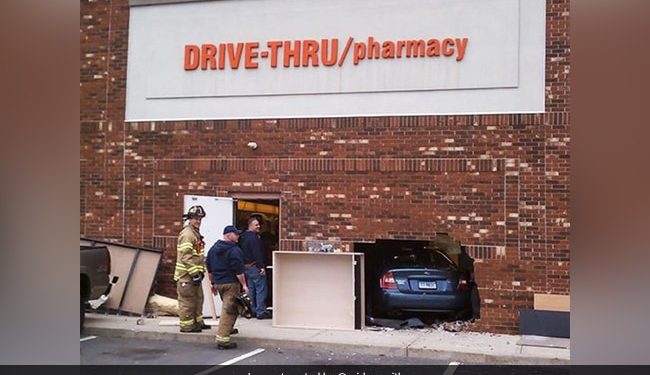 A hilarious Twitter thread about people who, consciously or unconsciously, take simple instructions too literally, is gaining ground on the microblogging platform. Shared by user @mideysmith on Saturday, the thread featured several images showing funny but horribly failed instructions.

From the icing on a cake “in purple” to keeping your phone and wallet under “watch”, the funny pictures have left the internet in crevices. The very first image from the Twitter thread showed a car crashing through a wall of a pharmacy with the words “Drive Thru” written on it.

Another image showed a person with his phone “under surveillance”, while the sign in front of him asked people to “keep an eye on valuables”.

😂 Keep an eye on valuables pic.twitter.com/lXvbyQm5c6

Another hilarious photo showed a man putting his dog in a green bin while a sign read: “If your dog poops, throw it in the trash.”

You only had one job pic.twitter.com/vKO4Y7TFx0

One pole also showed a man holding a pole with one hand and smoking with the other while the “Smoking Area” sign with an upward arrow was on it.

Since it was shared, the thread has racked up over 30,000 likes and over 5,000 retweets. Internet users loved the photos and couldn’t stop sharing more such images. They even flooded the comment section with smiling emojis.

One user wrote: “My mood has already improved”. “Nice thread. I saved them all,” said another.

A third simply commented, “Hilarious thread,” while a fourth said, “Losing control” with a picture of a keyboard with a broken Ctrl key.