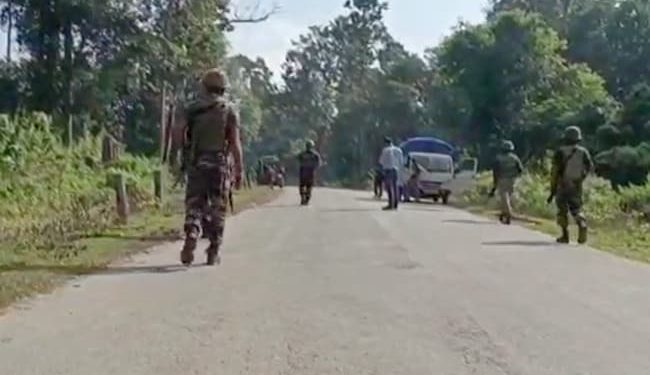 The military claimed it suffered no damage in the ambush.

The banned ULFA (Independent) unit took responsibility for an ambush on an army patrol party in Assam’s Tinsukia district on Tuesday, with security forces claiming at least one terrorist was injured.

The terror organization said in an emailed media statement that the ambush, codenamed “Operation Lakhipathar,” was undertaken on the occasion of “Protest Day,” which the terrorist organization celebrates on November 28.

During a territory domination exercise, the army team was ambushed on Pengeri-Digboi Road in the Barpathar area on Monday morning.

The terrorists detonated an improvised explosive device (IED) on the lead mine-protected vehicle (MPV) and fired about 20-30 rounds.

The military has claimed it suffered no damage except for a puncture, and retaliatory fire left at least one ULFA(I) terrorist “seriously wounded, as evidenced by splattering bloodstains found in the forest area”.

A joint operation with state police was launched in the area immediately after the incident, deploying sniffer dogs and specialized equipment, but no further contact with the terrorists could be made, an army spokesman said.

The fleeing terrorists left behind a remote device, batteries, cables and food, he said.

ULFA(I), on the other hand, claimed that the attack resulted in damage to the MPV and injuries to several security personnel.

The terrorist organization did not report any injuries to its cadres.

ULFA(I) ‘Protest Day’ marks the launch of ‘Operation Bajrang’ against the terrorist group by the military in 1990.

At Gurugram Dog Wedding, Dhols, Baraatis and a Haldi ceremony