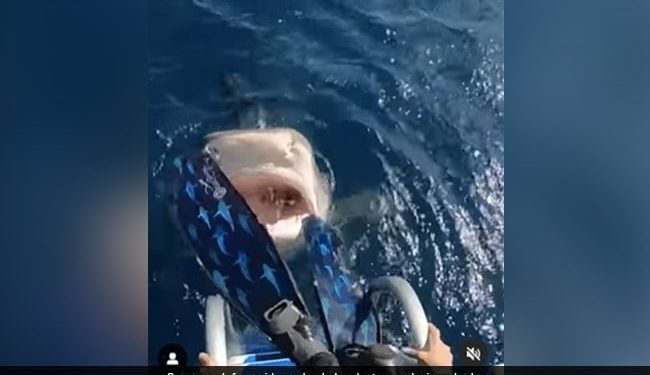 The video garnered over 108,000 likes and over two million views.

In a terrifying incident, a diving expert narrowly avoided being chewed by a huge tiger shark as she prepared to enter the waters of Hawaii. The dramatic moment was captured on camera as marine explorer Ocean Ramsey was about to dive into the waters off Oahu after seeing a shark crash into plastic pollution.

In the clip, just as Mrs. Ramsey was about to drop by to help, she took one last look into the choppy water. At that point, her face was inches away from the shark—a prominent one in the area nicknamed Queen Nikki. Mrs. Ramsey quickly withdrew to the boat when the apex predator came out of the water and tried to get a bit out of the scientists’ fins.

Rather than startle, Mrs. Ramsey was seen laughing at the incident. At the end of the video, she was also heard to identify the shark by name and continued her dive to find two other large female sharks in the water.

“I saw a shark bumping into floating plastic so I ran in and this was my greeting,” she joked on Instagram, before telling her followers that Nikki, with whom she swam for years, hadn’t tried to attack her.

“I couldn’t see far and I don’t think they could, so I think Nikki was more responsive to my first sound coming in and shadow,” she said. “I always love to see their white bellies coming out of the deep and in this case it’s what gave away her position so she was actually easier to see coming up vertically compared to the others already on the surface Ms Ramsey added.

Further, in the post’s caption, she described the sharks’ actions as a “spy hop,” poking their heads out of the water to see what’s around them in murky waters.

Meanwhile, an internet user jokingly wrote in the comment section: “By the way, almost gets eaten at work”. Another added: “And she still got in there. I wish I had the courage to do that. I’m fascinated by sharks and orcas, but I can’t reach them.” A third commented, “Aww she says hello, with her teeth.” “Wow, that was close,” added the fourth.

The video garnered over 108,000 likes and over two million views.