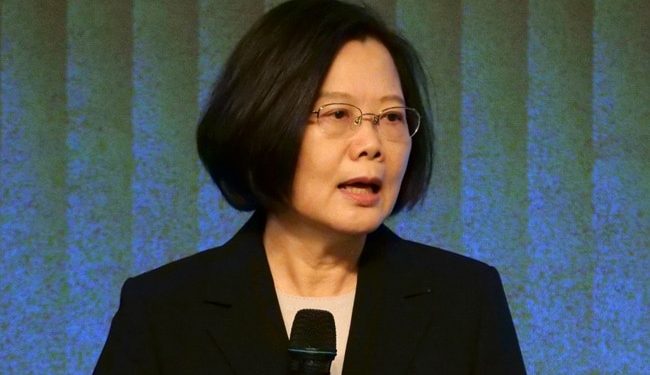 The Taiwanese president said they must be ready for a possible Chinese invasion.

Taiwan’s president fears a “potential threat” of invasion by China amid repeated indications from Beijing in that direction, RT news agency reported.

It quoted Taiwanese President Tsai Ing-wen’s statement to The Atlantic, where she expressed a “real threat” of a Chinese invasion.

The RT news agency also quoted an article written by Barack Obama’s speechwriter and deputy national security adviser, Ben Rhodes. In the article, Tsai said they should be ready for a possible Chinese invasion.

“It’s real that this could happen to us, there’s a real threat. It’s not hype,” she said.

Although China’s military is much larger than Taiwan’s, Tsai has also tried to ramp up defense spending. Under her tenure, defense spending has increased 13 percent and is expected to reach $19 billion by 2023, the RT news agency reported.

Taipei wants to make the invasion too expensive for China

“As the [People’s Liberation Army] want to do something drastic, [Chinese President] Xi must weigh the costs. He should think twice,” RT news quoted Tsai as telling the former White House official.

But even with Taiwan’s surge in defense spending, and even after the US approves a billion-dollar arms sale to Taipei, Taiwan still needs the West to fund its military, just as it has for Ukraine.

The RT news agency further quoted analysts as citing this military muscle as a warning to the West not to interfere in the reunification with Taiwan.

Earlier on Monday, China criticized British Commerce Secretary Greg Hands over his visit to Taiwan and said Beijing strongly opposes any official interaction between the London region and Taiwan.

During the regular media briefing, Zhao Lijian, the spokesman for China’s Foreign Ministry, said: “China firmly rejects any official interaction with Taiwan by any country that has diplomatic ties with China.”

Under Xi, China has taken a tougher stance on Taiwan, claiming the island is a breakaway province that will eventually be “reunited” with the country.

Its strong position has put it at odds with the United States and its Western allies, which maintain strategic ambiguity, but tensions escalated in August following the visit of US House Speaker Nancy Pelosi to Taiwan.

China saw the visit as a challenge to its sovereignty over the nation and retaliated with a display of strength and power by conducting large-scale military exercises and firing ballistic missiles over Taiwan.

The 69-year-old won a historic third term as president of China last month as he stacked the all-powerful Politburo Standing Committee with loyalists, cementing his role as the most powerful leader since Communist Party founder Mao Zedong.

In his opening speech to the party congress, Jinping announced that China will peacefully reunite Taiwan and not abandon the possibility of using force, Geo-politik reported.

The statement from the Chinese president indicates that the unification of Taiwan with China is the main agenda for him.

His statement has hinted that China is likely preparing for an imminent invasion of Taiwan. Wanting to bring China to the center of the world stage, Xi Jinping has raised national security to the highest level and has called on the nation to “be united in the struggle” to deal with hardship.

End of the road for India’s key players?