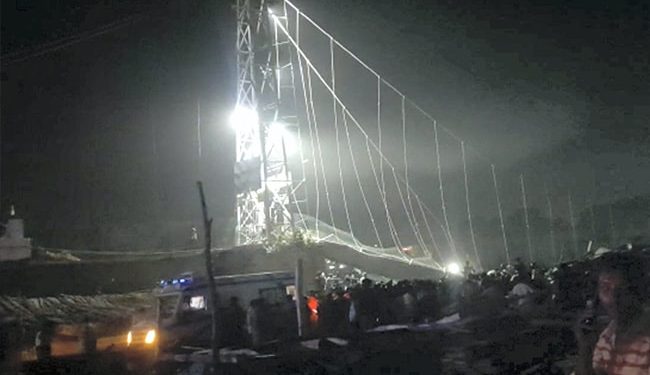 Goswami said he went to Morbi with family to enjoy the Diwali holiday.

For Vijay Goswami, a resident of Ahmedabad, and his relatives, it was a close shave as they visited the suspension bridge in the Morbi of Gujarat on Sunday afternoon, but returned halfway across the bridge in fear after some youths from the crowd began shaking it.

A few hours later, their fears proved justified when that bridge over the Machchhu River, a tourist attraction, collapsed around 6:30 p.m., killing at least 90 people.

The British-era bridge had reopened to the public just four days ago after being closed for renovations for seven months.

Goswami said he went to Morbi with family to enjoy the Diwali holiday.

“There was a huge crowd on the bridge. My family and I were on the bridge when some young people started shaking it deliberately. It was impossible for people to stand without any support. Because I felt it was dangerous could be, family and I came back after we covered some distance on the bridge,” Mr Goswami told reporters after reaching Ahmedabad.

“Before I left the place, I warned the staff on duty to avoid people shaking the bridge. However, they were only interested in selling tickets and told us there is no system to control the crowd. Hours after we left Our fears came true when the bridge finally collapsed,” he said.

A video that has gone viral on social media shows some youths kicking and shaking the bridge ropes to scare other tourists.

Several children at the site told reporters that their relatives or parents had disappeared after the bridge collapsed.

“There was a huge crowd when the bridge suddenly collapsed. I survived because I grabbed a hanging rope and slowly climbed up. But my mother and father are still missing,” a 10-year-old boy told reporters.

Mehul Raval, one of the survivors of the tragedy, said nearly 300 people were on the bridge when it collapsed.

“The bridge suddenly collapsed when we sat on it. All the people fell down. Many people died while many were injured. The bridge collapsed mainly because it was overcrowded,” said Mr Raval, who has been admitted to the civil hospital. from Morbi, told reporters from the hospital bed.

A local resident said: “There were almost 300 people on the bridge, which was opened to the public a few days ago. The majority of the victims were children, as they came here to enjoy their Diwali holiday. The locals immediately rushed to the scene of the accident, and drew many people alive.”

A large number of people living in different parts of Morbi rushed to help those who fell into the river after the bridge collapsed.

Another resident said the incident opened the wounds of the 1979 Machchhu Dam tragedy, when thousands of local residents died from flooding.

“All local residents living in the area came to the rescue and rescued many. This is the first major incident for Morbi after the 1979 dam burst incident. This bridge collapsed due to overcrowding. Rescue was made difficult by low light in the evening ,” he said.

“I pulled out many people alive, but many others were already dead when they were taken out. Everyone is doing their best to help people,” he said.