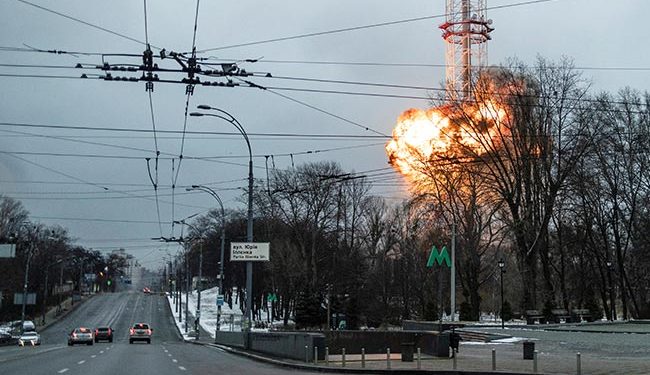 The salvos came as Moscow and Kiev confirmed the renewal of an agreement.

New Russian strikes hit cities across Ukraine on Thursday, the latest in a wave of attacks that have crippled the country’s energy infrastructure as winter sets in and temperatures plummet.

Repeated shelling disrupted electricity and water supplies for millions of Ukrainians, but the Kremlin blamed the civilians’ suffering on Kiev’s refusal to negotiate, rather than Russian missiles.

AFP journalists in several quotes from Ukraine said the new strikes came with snowfall for the first time this season and after officials in Kiev warned of “difficult” days ahead with an approaching cold snap.

The salvos came as Moscow and Kiev confirmed the extension of an agreement allowing Ukraine to export grain through the Black Sea, which aims to support global food supplies.

Ukraine has faced a heavy string of attacks on its power grid following battlefield victories against Russia, the latest of which was Moscow’s withdrawal from the southern city of Kherson.

“Two cruise missiles were shot down over Kiev. Information on any casualties and damage is being clarified,” the Kiev regional government announced, adding that Russian forces had also deployed Iranian-made drones.

The head of the central region of Dnipropetrovsk, Valentyn Reznichenko, said Russian attacks hit the administrative center of Dnipro.

“An industrial company has been hit. There is a big fire,” he said, later announcing that 14 people were injured, including a 15-year-old girl.

In the southern region of Odessa, a Russian strike also targeted infrastructure and the governor warned residents of the threat of a “massive” missile strike on the Black Sea region.

“I ask the residents of the region to stay in shelters,” said Maksym Marchenko.

President Volodymyr Zelensky released amateur footage of what he said showed a Russian attack on Dnipro, calling Moscow a “terrorist state” and saying Moscow “just wants to inflict more pain and suffering on the Ukrainians”.

However, the Kremlin said that Kiev was ultimately responsible for the fallout from the blackout.

“The unwillingness of the Ukrainian side to solve the problem, to start negotiations, the refusal to reach an agreement, this is their consequence,” Kremlin spokesman Dmitry Peskov said.

The largest wave of Russian missiles on cities across Ukraine earlier this week cut power to millions of homes, but supplies to people cut off were largely restored within hours.

However, Ukrainian energy company Ukrenergo said “a cold snap” had boosted demand in regions where electricity has recently been restored.

“This has further complicated the already difficult situation with the electricity system,” the company said.

Tensions rose earlier this week after a rocket landed in a Polish town on the border with Ukraine, and there was a flurry of blame over who was responsible for the blast that left two dead.

Zelensky, after previously saying a Russian missile was to blame, seemed to soften his public comments on the matter, which had raised concerns of a dangerous escalation.

“I don’t know what happened. We don’t know for sure. The world doesn’t know,” Zelensky said.

“But I’m sure it was a Russian missile, I’m sure we fired from air defense systems. But it’s impossible to talk about anything specific today – that it was the air defense of Ukraine,” he added.

Ukrainian Foreign Minister Dmytro Kuleba also appeared to reverse Kiev’s firm position that it was a Russian missile that hit Poland after a phone call with US Secretary of State Antony Blinken.

“We share the view that Russia bears full responsibility for its missile terror and its consequences on the territory of Ukraine, Poland and Moldova,” Kuleba said on Twitter.

Russia said images from the impact site showed a missile fired through Kiev and that the strikes targeted locations 35 kilometers (20 miles) from the Polish border.

“He confessed in front of me”: Woman’s father killed by live-in partner

“We See You”: Ukraine publishes video of its soldiers killing 5 Russian troops

"We See You": Ukraine publishes video of its soldiers killing 5 Russian troops