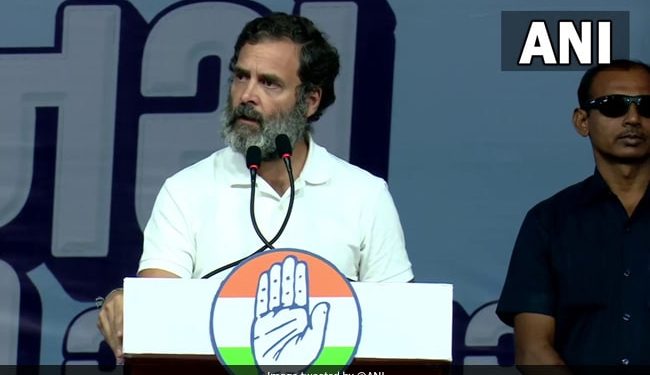 Congress leader Rahul Gandhi topped Gujarat General Assembly polls on Monday accusing the ruling Bharatiya Janata Party (BJP) of drafting plans to displace adivasis, who are the “first owners of the land”, by handing over forests to industrialists.

He also said the government policy is creating “two Indias” of select billionaires and the poor.

Rahul Gandhi addressed two rallies, one in Mahuva in Surat district and another in Rajkot, his first after the election manifesto of the Gujarat assembly was announced earlier this month.

Rahul Gandhi said he felt the pain of farmers, youths and tribes after meeting them during his Bharat Jodo Yatra.

He cited the tragedy of the Morbi bridge collapse, which killed 135 people last month, and claimed that no action had been taken against the “real culprits” because they have a “good relationship” with the BJP in Gujarat.

Speaking at an election rally in Rajkot, he said that while guards (posted at the scene of the bridge collapse) were arrested and jailed, no action was taken against the “real culprits” as they have ties to the BJP.

Rahul Gandhi also spoke of unemployment, inflation, demonetization impact, “faulty GST”, and waiving NPAs worth millions of billionaires while the central government does not extend the same benefit to poor farmers.

The Congress MP took a break from his Bharat Jodo Yatra, who got his Maharashtra leg on Sunday, and traveled to Gujarat to follow the campaign trail. The Congress, which had won 77 seats in the 2017 polls, is seeking to challenge the BJP, seeking a seventh consecutive term in Prime Minister Narendra Modi’s home state.

Rahul Gandhi said his 3,570 km yatra, which started on September 7 from Tamil Nadu, was for the unity of the country and during the foot march across the country, he felt the pain of farmers, youth and tribal people after listening to their problems.

“They (BJP) call you ‘vanvasi’ (forest people). They don’t say you are the first owners of India, but you live in the jungle. Do you see the difference? It means they don’t want you to live in cities , see your kids become engineers, doctors, learn to fly planes, speak English,” he said at the rally in tribal-dominated Mahuva.

The Lok Sabha member from Kerala, who further attacked the ruling party, claimed that the BJP wants to keep tribals away from modern health and education facilities.

“They want you to live in the jungles, but don’t stop there. Then they start taking the jungles away from you. If it continues like this, in another 5 to 10 years all the jungles will be in the hands of 2 to 3 industrialists , and you will have no place to live, no education, health and work,” Rahul Gandhi added.

In fact, they worked to weaken key legislations such as the PESA Act (Panchayat Extension to Scheduled Areas Act, the Land Acquisition Act and Forest Rights Act, among others), he claimed.

Rahul Gandhi said that the yatra was inspired by two sons of Gujarat-Mahatma Gandhi and Sardar Vallabhbhai Patel but unfortunately it did not pass through the western state.

“Grief is experienced during conversations with farmers, young people and tribes. Farmers do not get correct rates (for agricultural products), or insurance money, … their loan is not forgiven. Young people are unemployed, their dream is broken. Someone wants to become an engineer, his parents spend money on his education, but he works as a laborer (after he gets a degree),’ he said.

Rahul Gandhi said in Rajkot that the bridge tragedy is not a political issue, but the question is why no action has been taken against those who were behind it (tragedy), and why no FIR (has been filed against them). They arrested chowkidars (watchmen) and put them behind bars, but no action was taken against the real culprits.

The British-era suspension bridge over the Machchhu River collapsed on the evening of October 30, killing 135 people, including several women and children. Morbi was part of Rajkot district before the split. Gandhi took aim at the BJP government, saying its policies are creating “two Indias”: one of the billionaires who can do what they dream of, and the other of the poor struggling to live amid inflation and unemployment.

“Two Indias are being created – one of the billionaires who can do what they dream of and the other consisting of the poor, peasants, workers and small businessmen. We don’t need two Indias. We need one India of justice,” said he. said.

He said the micro, small and medium-sized enterprises (MSME) was the real job generator before it was forced to shut down due to its demonetization in 2016 and the poorly executed Goods and Services Tax (GST) implementation.

Speaking about the COVID-19 pandemic, Rahul Gandhi said that the government failed to come to their aid when workers walked miles on the road on an empty stomach.

“When workers died on the roads, the BJP government refrained from lending millions of dollars to the richest Indians,” he said.

Rahul Gandhi said the banknote ban, GST and the handling of the COVID-19 pandemic were not policies, but the “weapons against farmers, SMEs and poor workers meant to finish them off and make way for 2-3 billionaires of the country. “

He said the country is experiencing “the highest unemployment rate in the past 45 years” and alleged PSUs are being privatized and thousands of government vacancies are not being filled.