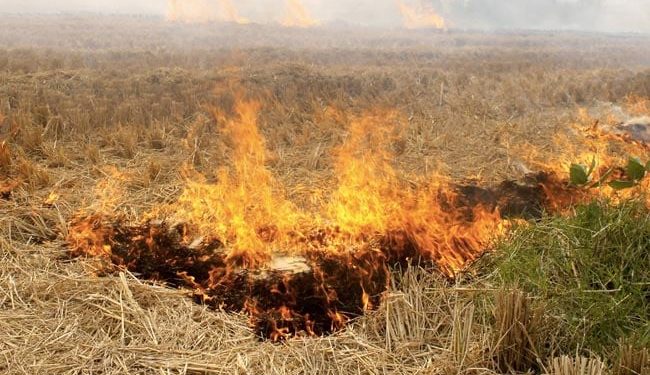 A tax official (Patwari) who went to inspect the stubble burning was held hostage for more than 24 hours by farmers in the village of Jeewan Wala in the Faridkot district of Punjab.

The farmers demanded written assurances that their stubble would not be burned and said the official will not be released until their demands are met.

The patwari had visited the district to inspect a stubble burn report reported statewide.

However, Kalnab Tehsildar and SDM Kotkapura reached the spot and tried to talk to the farmers, but they failed to convince the farmers to let go of the official.

“SDM promised to deliver machines, but nothing has been done. We are burning stubble because there is no other option,” said one farmer.

Anil Kumar, Tehsildar, Faridkot said: “Our nodal officer gave a report of stubble burning. Patwari had come here to find out. The villagers found out and took him hostage. We are talking to the farmers.”

Earlier on Thursday, local farmers in Bathinda district of Punjab expressed their dismay at the failure of the state government led by Prime Minister Bhagwant Mann to find an alternative to the stubble burning problem, threatening all officials who would come to stop them from burning the stubble, taking them hostage.

“If officials come to stop us from burning the residue on the farm, they will be held hostage, the government can impose so many fines on them, but we will not pay the fine,” said the local villagers of Bhatinda.

The local farmers lashed out at the bad use of the government to avoid the problem of stubble burning, saying: “They are forced to burn the stubble every year. It is not their hobby to do all this. Farmers and their Families are affected by going to the stubble first.”

“Pollution is not just Delhi’s problem, but the whole problem of North India. The center needs to come forward and take specific steps so that all of North India can be rid of pollution. Air pollution is a problem in North India. AAP “The government of Delhi or the government of Punjab are not solely responsible. This is not the time for the blame game. There should be no politics on such a sensitive issue. I admit stubble is burning in Punjab,” said Mr Kejriwal.

Arvind Kejriwal hoped that much fewer incidents of stubble burning would be reported in Punjab next year and said steps are being taken.

“Farmers are not responsible for it. They want a solution. The day they find the solution, they will stop burning stubble. If stubble is burned in Punjab, our government is responsible for it. We take responsibility for it. in government for only six months, which is a very short period of time. The government of Punjab has taken steps. I hope the number of stubble burns will be much less next year,” he said.

The Delhi Chief Minister’s comments come after the national capital reported air quality in the ‘severe’ category for the second consecutive day.