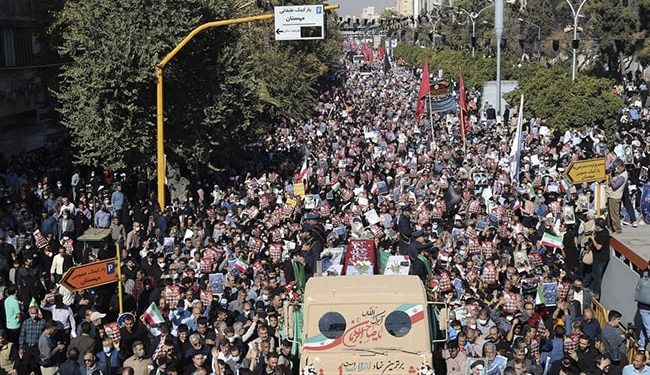 Mourners gathered in Shiraz to bury the victims of a deadly attack on a shrine.

Mourners gathered in the southern Iranian city of Shiraz on Saturday to bury the victims of a deadly attack on a shrine, while chanting slogans against nationwide “riots” over the death of Mahsa Amini.

At least 15 people were killed at a major Shia Muslim shrine in the city on Wednesday, according to official media, in an attack claimed by the Islamic State group.

The shooting at Shah Cheragh’s mausoleum occurred on the same day that thousands of people across Iran paid tribute to Amini, 40 days after her death in police custody.

Amini, 22, died on September 16, three days after her arrest by the vice squad in Tehran for allegedly violating the Islamic dress code for women.

Statements made by Iranian President Ebrahim Raisi on Thursday appeared to link the attack in Shiraz, one of the deadliest in the country in years, with the protests and “riots” following Amini’s death.

“The enemy’s intent is to disrupt the country’s progress, and then these riots pave the way for terrorist acts,” he said in televised comments.

During Saturday’s funeral processions in Iran, the crowd also chanted slogans condemning the United States, Israel and Britain for allegedly being “behind the riots,” according to live images broadcast on state television.

Waving Shia symbols, the crowd marched through downtown Shiraz and followed a vehicle carrying the victims’ coffins draped in the Iranian flag.

The crowd can be heard chanting “Death to America, to Israel, to England” and “The vigilant revolutionary people hate the rioters.”

During the ceremony, the head of the Revolutionary Guards, the ideological branch of the Iranian army, urged “a limited number of young people” by the enemies of the Islamic Republic to end the “riots”.

Students from several universities in Tehran and other Iranian cities have protested in the weeks since Amini’s death, chanting against the regime.

“Stop taking to the streets,” said the head of the Revolutionary Guards.

Meanwhile, Salami accused the Saudi leaders of fueling the unrest and warned the royal family “and the media under their control to exercise caution”.

“You who provoke people and sow the seeds of incitement by showing images (from Iran), think a little bit about what could happen to you,” Salami added.