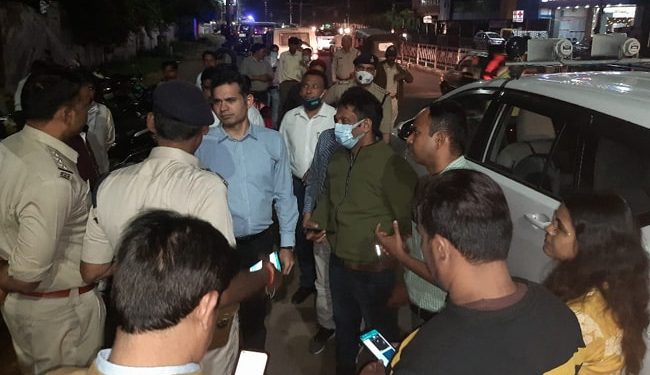 Several people continued to cough and gasp in panic after a gas leak from a water treatment plant in Madhya Pradesh’s Bhopal last night.

15 of them, including two children, had to be taken to hospital, officials said, adding their condition is now stable.

The gas leak was reported from a chlorine cylinder installed at the water treatment plant in the city’s mother Indian colony.

Local residents say they emerged from their homes around 6 p.m. after a strong smell of gas in the area. Many began to cough and vomit, and some also reported a burning sensation in their eyes.

Two children also passed out from the strong smell, they said.

The residents then informed the police and the fire brigade.

The gas leak was first reported at 2:30 p.m., after which technicians attempted to repair the cylinder, but the gas started leaking again in the evening, officials said.

Avinash Lavania, Collector, Bhopal said the situation was under control within half an hour. He said the firefighters and officials submerged the cylinder in a water tank to allow the gas to dilute in the water.

Using a tap, they immersed the cylinder, which contained about 900 kg of chlorine gas, in the water tank.

“There was no stampede-like situation and no one was seriously injured in the incident. Only a few people were taken to hospital as a precaution. He had spoken to the doctors, there was nothing wrong,” said Mr Lavania.

The Mother India Colony, home to about 400 families, is located near the Idgah Hills – one of the hardest hit areas during the 1984 Bhopal gas disaster, which left thousands dead and more than 5.5 lakh people. were affected.

Officials said a probe has been launched to determine the exact cause of the gas leak.

“Where Our Kids Can Light Diyas”: The Diwali Wishes of Rishi Sunak from Downing Street