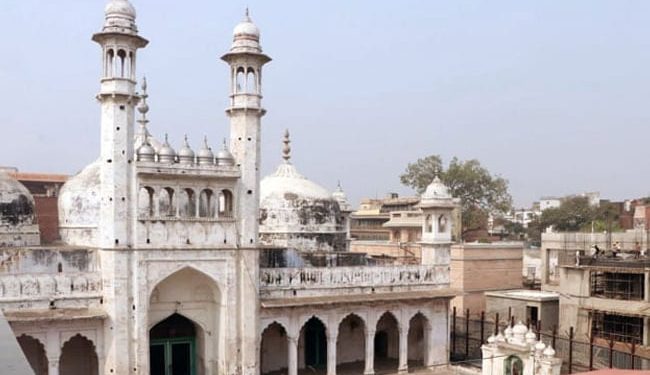 The court had previously rejected the demand for carbon dating of the ‘shivling’.

An expedited court in Varanasi will rule today on the plea for worship of the ‘Shivling’ who, according to the Hindu side, was found on the grounds of the Gyanvapi mosque.

The Civil Judge Senior Division Fast Track court will rule on the three main demands of the litigant including the permission for the immediate commencement of Swayambhu Jyotirlinga Bhagwan Vishweshwar’s prayer, the transfer of the entire Gyanvapi complex to the Hindus and the prohibit the entry of Muslims into the buildings of the Gyanvapi complex.

It should be noted that the Muslim side is currently allowed to offer prayers.

At the previous hearing that took place in October, the Varanasi court had denied a “scientific investigation” into the alleged “Shivling.”

The Hindu side had demanded radiocarbon dating of the structure they claimed was a Shivling found in the wazukhana of Gyanvapi Mosque.

However, the Muslim side said the structure found was a “fountain.” The Hindu side then filed a request with the Varanasi court on Sept. 22 to obtain a carbon dating of the object they believed to be “Shivling.”

The Hindu side said they would approach the Supreme Court against the verdict of the Varanasi court, refusing to allow a “scientific investigation” of the alleged “Shivling”, who claimed to have been found on the property of the Gyanvapi -mosque.

At the September 29 hearing, the Hindu side had demanded a scientific investigation of the ‘Shivling’ by the Archaeological Survey of India (ASI) and the radiocarbon dating of ‘Argha’ and the area around it.

Varanasi court said, “It would not be right to order the investigation of Archaeological Survey of India (ASI) and by issuing such order, the age, nature and structure of said Shivling is known, even this does not imply the possibility of a just solution.”

Attorney Vishnu Jain, who represents the party in the Gyanvapi case, said, “The court has rejected our demand to seek carbon dating. We will take this order to the Supreme Court and challenge it there. I cannot disclose the date at this time, but we’ll soon be challenging this order in the Supreme Court.”

“If the Shivling is damaged, the religious feelings of the general public could also be harmed,” the Varanasi court said.

Carbon dating is a scientific process that determines the age of an archaeological object or finds.

After hearing the arguments of both sides, the court reserved the order in the Gyanvapi Mosque-Shringar Gauri case.

On May 20, the Supreme Court had ordered the transfer of the case related to the worship at Gyanvapi Mosque from the civil court to the district judge, Varanasi.

“We have responded to the carbon dating request. Steen does not have the ability to absorb carbon. The Supreme Court in its May 17 order, according to which the object found by the commission should be protected. The SC order will prevail, so the object can not be opened According to the Hindu side the process will be scientific even if so the object will be tampered with Chemicals will be used for the test We will take action based on the order of the court on October 14,” Ahmed had told ANI.

Another lawyer representing the Muslim side, Tohid Khan, had said: “The court will rule on whether the carbon dating application is acceptable or should be rejected. The structure is a fountain and not Shivling. The fountain can still be made operational.”

Quota for “bad”: “forward” reservation through back door?