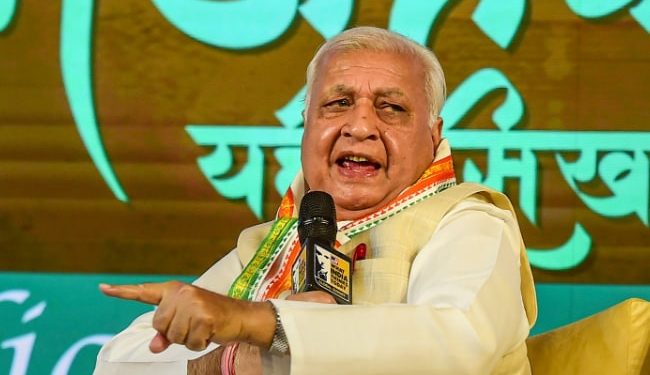 Kerala governor has requested the resignation of vice chancellors of nine universities. (File)

Kerala Justice Minister P Rajeev hit back at Governor Arif Mohammed Khan on Sunday after requesting the resignation of the vice chancellors of nine universities in the state. Neither the University Grants Commission (UGC) regulation nor the constitution says that the chancellor must be the governor, Mr Rajeev said.

The minister also responded to the governor’s statement drawing parallels between Punjab and Kerala, saying Kerala is replacing Punjab as the capital of drugs.

In a strong statement, Mr Rajeev said: “Some have declared war on Kerala. Who in a position of responsibility is doing that?”

“Kerala is a state where the rule of law prevails. In Kerala, the government is taking a very strong and uncompromising action against drug use,” he said.

“At the moment there are restrictions in the central laws and we demand that they be overcome. The state government is taking strong action against drugs. Many people are conspiring to defame Kerala. I am not sure if this is part of it. All responsible people should respond based on facts. Speeches and statements made while holding a position of responsibility should be based on facts,” Mr Rajeev said.

On Saturday, while criticizing Pinarayi Vijayan’s government for its drinking policy, the governor said the state is in the process of replacing Punjab as the “capital of drugs”. While everyone campaigned against the consumption of alcohol, the Kerala government encouraged it, he said.