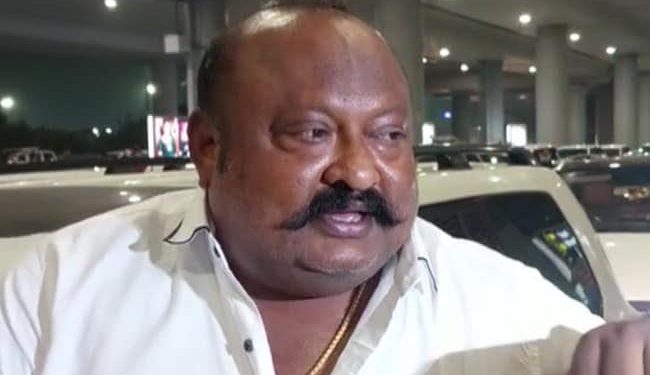 Gangula Kamalakar at the airport in Hyderabad.

Telangana minister Gangula Kamalakar returned from Dubai hours after his properties were searched by the Enforcement Directorate in an illegal mining and money laundering case, and said he has nothing to hide. “I have been in the (mine) business for 32 years and have always worked within the framework of the law in a transparent manner,” he told reporters at the airport last night.

“No one is above the law, so I will cooperate. That is why I returned in 12 hours. I will clear everything up and go back to Dubai,” he said as he made his way to Karimnagar, his constituency. He had gone to Dubai for a family trip.

In Karimnagar, inspections by the central agency ED and an income tax team are likely to continue today, following an operation from 10 a.m. to 8:30 p.m. yesterday. The twelve-member team, including three agents from the Indian Revenue Service (IRS), had arrived at the minister’s home in twelve vehicles. They carried important documents in seven bags.

Mr Kamalakar, Minister of Backward Class Welfare, Food and Civil Services, has granite companies in Karimnagar. In 2012, a case was filed against him alleging that the Treasury lost about Rs 750 crore as a result of his “illegal” operations. BJP leaders had complained against him again in November last year.

The ED action against the minister is likely to further fuel the struggle between the BJP and the TRS government led by Chief Minister K Chandrashekar Rao (“KCR”), who accused the Narendra Modi government of abusing central agencies to target non-BJP harass leaders. .

The ED raids also come less than a week after the Telangana Rashtra Samithi – recently renamed Bharat Rashtra Samithi for a national footprint (nod from the Election Commission pending) – won a round of elections in Munugode.

KCR has also alleged that the BJP has tried to bribe the party’s MLAs to switch sides.

The BJP has denied the allegations and has gone to the Supreme Court which, at the request of the BJP, allowed the state police to investigate the KCR party’s allegations.

Meta lays off 11,000 employees: Is the Big Tech Bubble bursting?