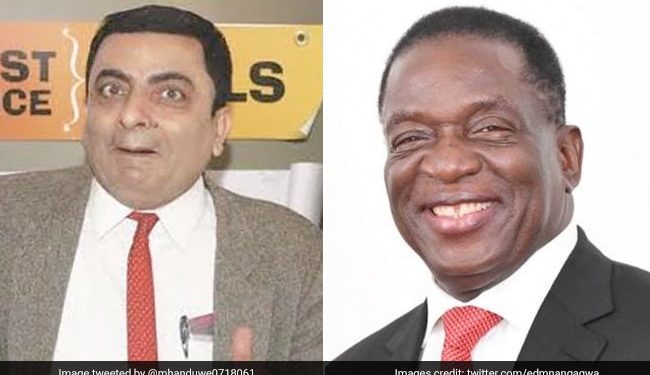 The president celebrated his country’s historic 1-run victory over Pakistan.

In recent days, cricket fans in Zimbabwe and Pakistan have been engaged in a verbal brawl over a non-cricket issue, which is the “Mr. Bean controversy” between the two nations. Zimbabwe’s president has now taken the war to the next level on social media, trolling Pakistan himself in a tweet featuring a Mr. Bean meme after winning a T20 World Cup match against Babar Azam-led Men in Green.

After Zimbabwe shocked Pakistan at their World Cup meeting in Perth during the ongoing World T20, the President of the Republic of Zimbabwe, Mr Emmerson Dambudzo Mnangagwa, tweeted to advise Pakistan next time the real Mr. bean to send.

“What a win for Zimbabwe! Congratulations to the Chevrons. Next time send the real Mr Bean… #PakvsZim,” wrote the Zimbabwean president.

What a victory for Zimbabwe! Congratulations to the Chevrons.

What is the Pak Bean Meme?

After Pakistan Cricket’s official Twitter account shared photos of the players preparing for the clash in Zimbabwe on October 25, a Twitter user named Ngugi Chasura responded to the tweet by saying: “As Zimbabweans, we will never forgive you. …you once gave us that fraud Pak Bean instead of Mr. Bean Rowan..we’ll settle the matter tomorrow. Pray the rain will save you.”

A Pakistani fan asked about the context, to which he replied that comedian Asif Muhammad, a double of Mr. Bean, traveled to Zimbabwe in 2016. The Pakistani comedian attended comedy shows, did road shows and was part of the Harare Agricultural Show. The comedian is hilariously known as ‘Pak Bean’. During his visit to Zimbabwe, Fake Bean was also accompanied by a police escort.

Meanwhile, Zimbabwe caused a major stir by beating Pakistan by one point in a Group 2 match on Thursday. Pakistan was chasing a goal of 131 and faltered as none of their batters, except Shan Masood (44), could score above 22. Pakistan eventually came to 129/8 in 20 overs. Masood fought a lonely battle as Sikandar Raza (3/25), Brad Evans (2/25), Blessing Muzarabani (1/18) put on brilliant performances. Previously, Mohammad Wasim marked his return to the team with a four-for-eight, while Shadab Khan took three wickets when Pakistan limited Zimbabwe to 130 for eight. Wasim returned figures of 24/4, while Shadab took 23/3 as Pakistan backed Zimbabwe after a strong opening tie between Craig Ervine and Wessly Madhevere. Sean Williams played a crucial 31 cameo as Zimbabwe managed to cross the 120 run.

Using nuclear weapons in Ukraine “makes no sense at all for us”: Vladimir Putin