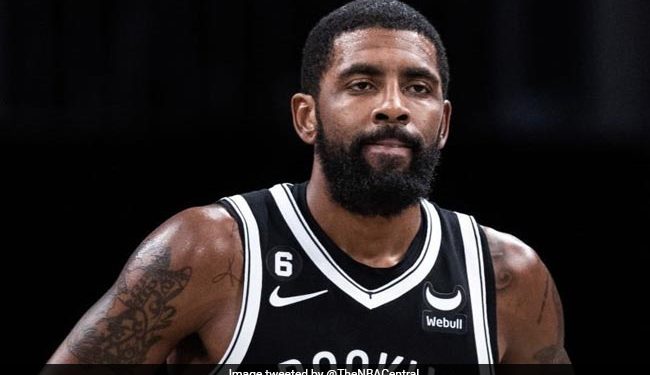 The NBA star stated that he had “no intentions” for disrespecting Jewish cultural history.

American basketball player Kyrie Irving apologized on Thursday after he was suspended by his club, the Brooklyn Nets, over allegations of anti-Semitism.

The NBA (National Basketball Association) star was given a five-game suspension after defending his decision to post a link to a documentary criticized on social media as anti-Semitic. On Twitter, the Brooklyn Nets said Mr Irving on multiple occasions refused to deny anti-Semitism or state that he is not anti-Semitic, which is “behavior that is harmful to the team”.

“As a result, we believe he is currently unfit to be associated with the Brooklyn Nets. We have decided that Kyrie will face a no-payment suspension until he complies with a series of objective remedial actions that will mitigate the damaging impact of his conduct and the suspension period is a whopping five games,” the team said in a statement.

Statement from the Brooklyn Nets pic.twitter.com/699px8XYpx

“To all the Jewish families and communities who have been hurt and affected by my post, I am deeply sorry that I have hurt you and I apologize,” he wrote, adding: “I initially responded out of emotion to the unfairly labeled as anti-Semitic, instead of focusing on the healing process of my Jewish brothers and sisters who were hurt by the hateful comments in the documentary”.

The NBA star also stated that he had “no intentions” to scorn Jewish cultural history related to the Holocaust or to perpetuate hatred. “I learn from this unfortunate event and hope we can find understanding between all of us,” Irving continued.

But although the basketball player came back from his initial statement, the Anti-Defamation League (ADL) said it could not “in good faith” accept Irving’s $500,000 donation to the anti-hate organization. From NewsMaduraADL stated that it was clear that “Kyrie feels no responsibility for his actions”.

“(Irving) has been given ample opportunity to do the right thing, apologize and condemn #anti-Semitism. He has failed at almost every step. This suspension is well deserved,” the organization added.

Notably, Mr Irving tweeted a link to a 2018 film’Hebrews for Negroes: Wake Up Black America,’ which is based on Ronald Dalton’s book of the same name and has been labeled anti-Semitic by civil rights groups. But after a protest, he deleted his original post and pledged to donate $500,000 to anti-hate organizations.