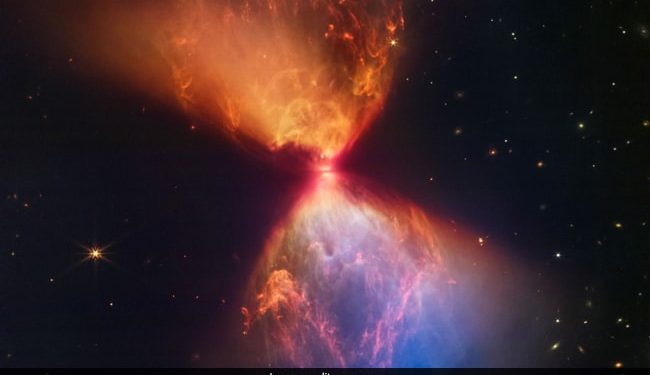 A stunning image of cosmic beauty, consisting of an ethereal hourglass of orange and blue dust ejected from a newly emerging star at its core, was recently photographed by NASA’s James Webb Space Telescope.

The telescope has revealed the once-hidden features of the protostar in the dark cloud L1527, providing insight into the beginnings of a new star. These flaming clouds in the Taurus star-forming region are only visible in infrared light, so they had never been seen before, making them an ideal target for Webb’s Near-Infrared Camera (NIRCam), NASA and the European Space Agency said in a statement.

“The most common features of the region, the clouds colored blue and orange in this representative color infrared image, outline voids created when material streaks away from the protostar and collides with surrounding matter. The colors themselves are due to layers of dust between Webb and the clouds. The blue areas are where the dust is thinnest. The thicker the dust layer, the less blue light can escape, creating orange pockets,” he added.

Countdown to a new star ⏳

Hidden in the neck of this “hourglass” of light is the very beginning of a new star – a protostar. The dust and gas clouds in this area are only visible in infrared light, the wavelengths Webb specializes in: https://t.co/DtazblATMWpic.twitter.com/aGEEBO9BB8

The statement went on to say that despite the chaos L1527 is causing, it is only about 100,000 years old, making it a relatively young body. Given its age and its luminosity in far-infrared light as observed by missions such as the Infrared Astronomical Satellite, L1527 is considered a class 0 protostar, the earliest stage of star formation.

The protostar resides in the Taurus molecular cloud, a stellar nursery for hundreds of nearly formed stars about 430 light-years from Earth.

The Webb Space Telescope, operational since July, is the most powerful space telescope ever built and has already released a slew of unprecedented data and stunning images. Scientists hope it will usher in a new era of discovery.

One of the main goals of the $10 billion telescope is to study the life cycle of stars. Another major research focus is on exoplanets, planets beyond Earth’s solar system.

(with input from AFP)

“I will work with everyone”: Biden’s message to Republicans on US House victory