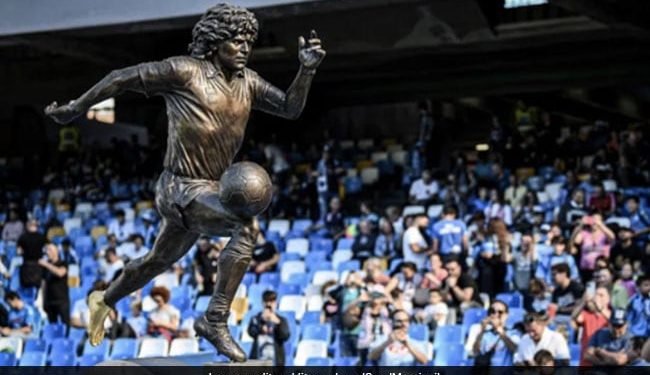 Napoli Football Team unveiled a new statue of Argentine legend Diego Maradona ahead of their match against Sassuolo. Maradona would have turned 62 today and Napoli wanted to honor him by paying tribute.

The status perfectly reflects Maradona’s golden left foot – it helped win big trophies. Maradona died of a sudden heart attack on November 25, 2020. He was 60. He was widely regarded as one of the greatest football players of all time.

A user by name Good morning on Reddit shared a photo of the statue. The caption read: “The statue of Diego Maradona was unveiled today in Napoli.”

The post has garnered 93,000 upvotes and several comments. One user commented, “Everyone is talking about golden feet. Take a moment to appreciate the artist’s efforts to get the statue almost in the air.” Another commented: “Wrong air, let’s appreciate that HAIR. It’s delicious.”

“Golden foot, golden hand, diamond nose, this man was a living treasure chest,” remarked the third. “This is actually an amazing statue compared to the atrocity of Ronaldo they unveiled a few years ago,” wrote the fourth.

He is a legend in his home country and had been instrumental in leading them to World Cup glory in 1986 and again to the final in Italy four years later.

He is also an icon in Naples, where as a player he helped Napoli win the only two Serie A titles in their history.

He had much less success as a coach, taking Argentina to the quarter-finals of the World Cup in South Africa in 2010 before embarking on a nomadic journey that took him to the United Arab Emirates and Mexico.

He was the coach of Argentine Primera Division side Gimnasia at the time of his death.