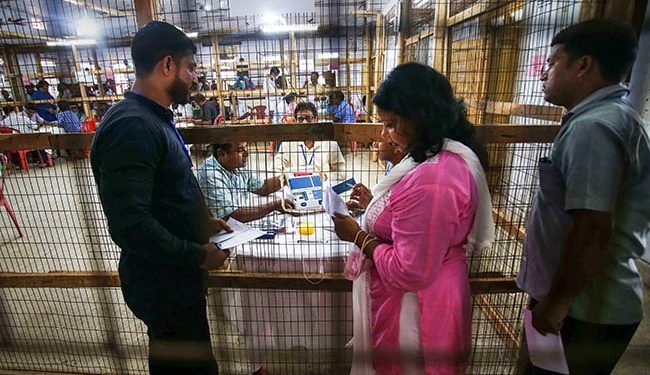 The counting of votes will take place on November 6.

The vote began Thursday in the by-elections for seven constituencies in six states — a contest that symbolizes the fierce battle between the BJP and regional parties.

The polls are being held in Mokama and Gopalganj constituencies in Bihar, Andheri (east) in Maharashtra, Adampur in Haryana, Munugode in Telangana, Gola Gorakhnath in Uttar Pradesh and Dhamnagar in Odisha.

Here are the LIVE updates on the bypolls:

Telangana’s Munugode Bypoll Is Most Watched: Chief Electoral Officer
In an exclusive interview with NewsMadura, Telangana Chief Electoral Officer Vikas Raj says they have made special arrangements in Munugode that will make it the most watched election ever, with CCTVs around the constituency and also webcasting from every polling booth controlled in the district, state and central level.
Election Commission To Announce Gujarat Poll Schedule Today

The Election Commission will announce the schedule for the election in Gujarat on Thursday at noon.

The polling station has convened a press conference to announce the program.

The term of Gujarat assembly will end on February 18 next year.

Telangana BJP president Bandi Sanjay staged a protest demanding that non-locals and TRS leaders be expelled from the Munugodu constituency, where the bypolls are being held today.

Mr Sanjay, who was on his way to Munugode when Telangana Rashtra Samithi (TRS) leaders failed to leave the constituency in Munugodu, was stopped by police on Vijaywada Highway in Abdullapurmet on Wednesday night.

Initially police stopped Bandi Sanjay’s convoy in Malakpet and then Vanasthalipuram and finally he was transferred to Abdullapurmet Police Station.

On Thursday, polls were underway amid tight security in the bypoll to the Munugode Assembly constituency in Telangana. Voting started at 7:00 am and continues until 6:00 am.

More than 2.41 lakh voters are eligible to vote in the bypoll.

Polls started Thursday for polls in Haryana’s Adampur constituency, the outcome of which will decide whether the Bhajan Lal family sticks to its five-decade bastion.

The poll started at 7 a.m. and lasts until 6 p.m. Nearly 1.71 lakh voters are eligible to vote. The votes will be counted on November 6.

Twenty-two candidates, all men, are in the fray. The main parties fighting are BJP, Congress, Indian National Lok Dal and Aam Aadmi Party.

Voting started at all 252 constituency polling stations in Bhadrak district at 7am and will continue until 6pm, they said.

The polls began Thursday morning ahead of by-elections for Bihar’s Mokama and Gopalganj constituencies under tight security, officials said.

The polls for the two seats are the first elections in the state since the ‘Mahagthabandhan’ government was formed about three months ago. Chief Minister Nitish Kumar, the de facto leader of the JD(U), dumped the BJP and formed a new coalition government in early August with the RJD, Congress and left-wing parties.

The polls started at 7 a.m. and will last until 6 p.m., election officials said.