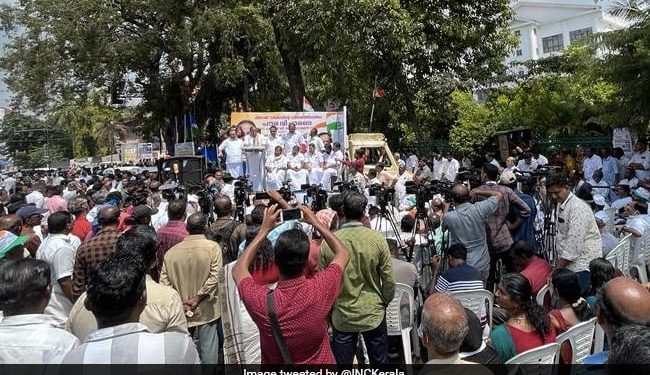 Hundreds of party activists marched through Kerala on protest marches.

The opposition party has launched statewide agitations today against the alleged anti-popular policies and administrative failure of the left-wing government in Kerala.

Hundreds of party activists marched across the southern state, marking the beginning of the three-phase “Paura Vicharana” (civilian lawsuit) movement.

The march was taken to the Secretariat, the administrative center, in Thiruvananthapuram and to the respective Collectorates in other districts, party sources said.

On the occasion of the inauguration of the state-level agitation, KPCC chief K Sudhakaran led the march to the secretariat.

At the opening of the March for the District Collectorate in Kozhikode, opposition leader VD Satheesan said the decision to launch a mass agitation against the CPI(M) government was taken jointly by Congress and the party-led United Democratic Front. (UDF).

The uproar was launched and revealed issues facing people neglected by the authorities, he said.

Referring to the rising price of essential goods, Satheesan said the state witnessed the biggest price hike in the past decade, but the left-wing government has not taken any steps to bring it under control.

Chief Minister Pinarayi Vijayan had yet to convene another meeting in this regard to discuss the price increase, he said.

In addition to K Sudhakaran and VD Satheesan, several senior leaders, MLAs and MPs led the march in various districts.

As a second phase of the anti-government uproar, the KPCC is planning two-day vehicle meetings under the auspices of the Block Congress committees in several districts between November 20 and 30.

Thousands of party employees would besiege the secretariat in the second week of December as the third and final phase of the protest, KPCC sources added.