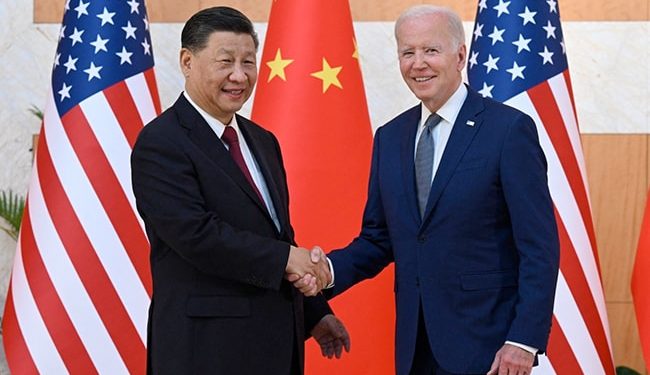 Presidents Joe Biden and Xi Jinping clashed over Taiwan on Monday but found common ground during the powers’ first personal summit in three years, including a joint warning against Russia using nuclear weapons in Ukraine.

Xi and Biden both tried to lower the temperature when they met for more than two hours on the holiday island of Bali, with the presidents both saying they wanted to prevent the high tensions from turning into conflict.

As a sign of progress on cooperation, the White House announced that Secretary of State Antony Blinken will visit China – the highest US visitor since 2018.

Biden and Xi, who is only making his second overseas trip since the pandemic, shook hands and smiled in front of the flags of the two countries at a hotel in Bali, where the Group of 20 opens a summit on Tuesday.

Biden, who sat opposite tables to Xi, said Beijing and Washington “share the responsibility” of showing the world that they can “manage our differences, prevent competition from becoming conflict.”

Xi, China’s most powerful leader in decades who has just begun to secure a norm-breaking third term, told Biden the world has “been at a crossroads”.

“The world expects China and the United States to handle the relationship well,” Xi told him.

Xi later told him that China and the United States “share more, not less” in common interests, according to a Chinese statement.

Tensions have risen sharply over Taiwan, with China conducting major military exercises in August after a visit to self-governing democracy, she says, by US House Speaker Nancy Pelosi.

Xi told Biden that Taiwan is the “first red line not to be crossed in China-US relations,” the statement from China’s foreign ministry said.

The White House said Biden had told Xi he was against any change on Taiwan — after the US leader repeatedly indicated Washington was ready to defend the island militarily.

Biden expressed US “objections” to China’s “coercive and increasingly aggressive actions against Taiwan, which undermine peace and stability in the Taiwan Strait and the wider region and endanger global prosperity,” the White House said.

Despite the clash with Taiwan, the White House said it had reached some agreement with China on Russia’s invasion of Ukraine — a high priority for Biden, who hopes to strip Moscow of its main potential source of international support.

Xi and Biden “reiterated their agreement that nuclear war should never be fought and can never be won and underlined their opposition to the use or threat of the use of nuclear weapons in Ukraine,” the White House statement said.

China, despite rhetorical support for Russia, has not supplied weapons for the war in Ukraine, with Moscow having to rely on Iran and North Korea, according to US officials.

Biden told Xi that “all members of the international community have an interest in encouraging the DPRK to act responsibly,” the White House said, using the acronym for North Korea’s official name.

Xi’s last face-to-face meeting with a US president was in 2019 with Donald Trump, who along with Biden identified China as a top international concern and the only potential challenger to US primacy on the global stage.

Though it was the first time Xi and Biden had met as presidents, the two have an unusually long history together.

By Biden’s estimate, he spent 67 hours as vice president in person with Xi, including during a trip to China in 2011 to better understand China’s then-waiting leader, and a meeting in 2017 in the final days of Barack’s administration. Obama.

On Tuesday, Xi will hold the first formal meeting with an Australian leader since 2017, Prime Minister Anthony Albanese announced, following Beijing’s concerted pressure campaign against its closest US ally.

Though he’s preoccupied with Xi, since the invasion of Ukraine, Biden has refused to deal directly with Russian President Vladimir Putin, who is conspicuously absent from the Bali summit.

The Kremlin cited problems with the planning and instead sent the longtime foreign minister, Sergei Lavrov, who arrived Sunday evening and underwent two health checks at a hospital in Bali, according to an official with Indonesia’s health ministry.

Lavrov, 72, denied reports that he was being treated at a hospital in Bali and told Tass news agency that he was preparing for the summit in his hotel.

Lavrov’s presence has cast doubt on a customary G20 group photo and joint statement, with Russia sure to reject any explicit call to end the invasion of Ukraine.