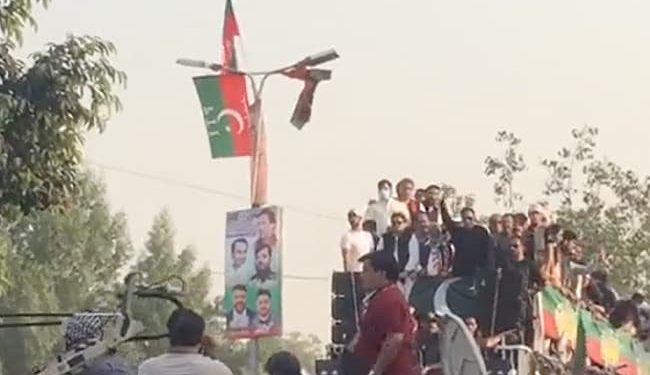 Pakistani senior leaders Tehreek-e-Insaf said on Thursday that former Pakistani Prime Minister Imran Khan believes the bullet-firing attack on him was carried out on the orders of three people, including Prime Minister Shehbaz Sharif, the country’s interior minister. and a top ISI general and his comments were based on information he had received.

“Recently Imran Khan told us to issue this statement on his behalf. He believes that there are three people on whose behalf this has been done – Shehbaz Sharif, Rana Sanaullah and Maj Gen Faisal. He said he received information and says that he on that basis,” Pakistani Tehreek-e-Insaf (PTI) leaders Asad Umar and Mian Aslam Iqbal said.

The PTI leaders also said Imran Khan’s condition is stable and he is out of danger.

Asad Umar, PTI general secretary, said in a video posted by the party that “the three people should be removed from their posts”.

“I spoke to Imran Khan because there were reports we received that Imran Khan is in danger. However, he said we should leave this to Allah. Imran Khan demanded that these three people be removed from their posts. We are waiting for Imran Khan’s nod. If these people are not removed, there will be nationwide protests,” he said.

“Imran Khan was shot in the leg. His CT scan has been done. If anyone had the slightest doubt, it should have been erased today, as Imran Khan said time and again that for the freedom of this nation, he is willing is sacrificing his life,” he added.

The suspect caught by police in Pakistan for opening fire during the PTI’s long march has said he wanted to kill former Prime Minister Imran Khan because “he misled the public,” media reports said.

Imran Khan was injured in a shooting incident near his container in Wazirabad in Pakistan’s Punjab province during his long march against the ruling coalition, ARY News reported.

“I thought of this when Azaan was going and on the other side Imran Khan takes out his container and makes noise. My conscience did not approve of this. I decided this suddenly… I conspired against Imran Khan from the day that he kicked off his long march from Lahore. I have decided that I will not let him live,” the gunman said, according to a video shared on social media.

When asked if anyone else was in the conspiracy, the gunman said: “I just conspired this and no one else is involved. I came on a bicycle and parked it at my uncle’s shop. He has a motorcycle showroom .”

Punjab police have confirmed that seven people have been injured and one person has been killed in the shooting incident. According to police, the murdered person has been identified as Muazzam Nawaz, Dawn reported.

Earlier, Faisal Javed Khan, a senator from Pakistan Tehreek-e-Insaf (PTI), who was injured during the long march in “the shooting incident” near the container containing Imran Khan, said it was an “assassin attack” on the former Pakistani prime minister, according to media reports.

Imran Khan started his long march to Islamabad last week and had targeted the country’s spy chief, accusing him of having a “political presser”. He had also attacked a few other officers.