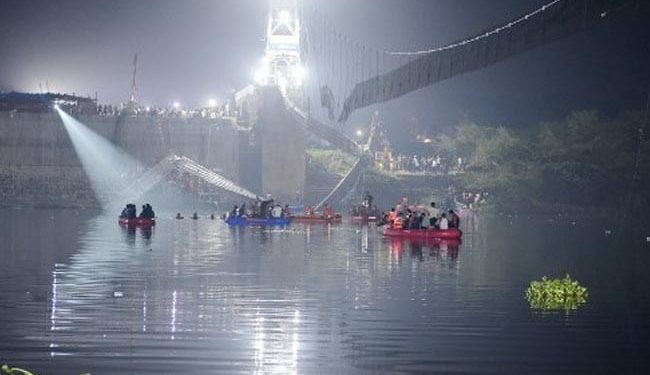 Nine people were arrested Monday in connection with the collapse of a pedestrian bridge in Gujarat that killed more than 130 people, police said.

The nine – all associated with a company that maintains the bridge in Morbi – were being investigated for wrongful death that did not amount to murder, senior police officer Ashok Kumar Yadav said in a statement.

The bridge, which had reopened days earlier after months of renovations, collapsed Sunday evening, sending hundreds of people into the river in Gujarat, Prime Minister Narendra Modi’s home state.

Authorities said nearly 500 people were on and around the nearly 150-year-old suspension bridge when supporting cables snapped.

CCTV footage showed the structure swaying back and forth — with a few people apparently staggering to it on purpose — before suddenly collapsing.

The walkway and fence plunged into the Machchhu River, leaving the other side dangling in mid-air as people fell into the water in the dark.

“I saw the bridge collapse before my very eyes,” said a witness who worked on rescue efforts all night, without giving his name.

“It was traumatic when a woman showed me a photo of her daughter and asked if I had saved her. I couldn’t tell her her daughter had died.”

Supran, another witness, said the bridge, which was a popular tourist attraction, was “packed”.

“The cables broke and the bridge collapsed in a split second. People fell on each other and into the river,” he told local media.

After the collapse, people clung to the twisted remains of the bridge or tried to swim to safety in the dark.

Another Morbi resident, Ranjanbhai Patel, said he helped extract those who had reached the banks.

“Because most of the people had fallen into the river, we couldn’t save them,” he said.

Local police chief P. Dekavadiya said the death toll exceeded 130 on Monday afternoon. Among them were 47 children, the youngest was a two-year-old boy.

A local MP, Kalyanji Kundariya, told media he had lost 12 family members in the accident, including five children.

Authorities launched a rescue operation immediately after the collapse, with boats and divers searching the river all night and all Monday.

The bridge, 233 meters long and 1.5 meters wide, was inaugurated in 1880 by British colonial authorities and made with materials shipped from England, reports say.

Sandeepsinh Jhala, chief officer of Morbi Municipality, said the bridge had not received a safety certificate after the recent repairs.

Reports called the company carrying out the repairs a part of the Gujarat-based Oreva group, which describes itself as the world’s largest clock manufacturer, and also makes lighting products and e-bikes. The company was not immediately available for comment.

PM Modi, who was due to visit the site on Tuesday, said he has “perhaps rarely experienced so much pain in my life”.

Moscow and New Delhi have maintained close relations for decades, and the Kremlin said in a statement that Russian President Vladimir Putin expressed its condolences.

Accidents from old and poorly maintained infrastructure, including bridges, are common in India.

In 2016, at least 26 people were killed in the collapse of an overpass on a busy street in Kolkata.

Five years earlier, at least 32 people were killed when a crowded bridge collapsed in the hill resort of Darjeeling.