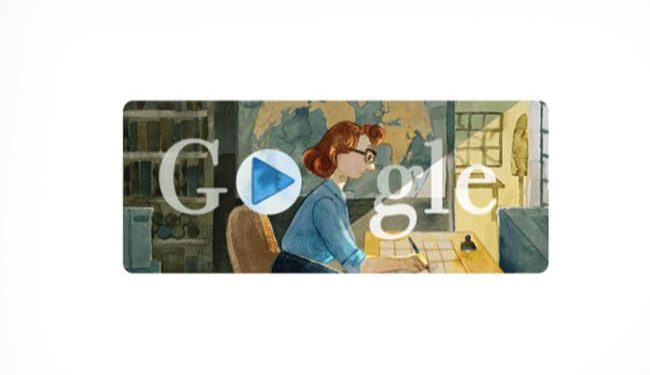 Google today celebrates the life of Marie Tharp, an American geologist and oceanographic cartographer, with a special and interactive doodle on the homepage. On this day in 1998, the Library of Congress named her one of the greatest cartographers of the 20th century, and Google is celebrating this achievement with a doodle. Ms. Tharp is also credited with creating the first scientific map of the Atlantic Ocean floor and proving the theories of continental drift.

According to the Google doodle pageMarie Tharp was born on July 30, 1920 in Ypsilanti, Michigan. Mrs. Tharp’s father worked for the United States Department of Agriculture and gave her an early introduction to map making, as the scribble suggests. She attended the University of Michigan for her master’s degree in petroleum geology. In 1948, she moved to New York City and became the first woman to work at the Lamont Geological Observatory, where she met geologist Bruce Heezen.

Heezen collected ocean depth data in the Atlantic Ocean, which Tharp used to create maps of the mysterious ocean floor. New echo sounder findings (using sonars to determine water depth) helped her discover the Mid-Atlantic Ridge. She took these findings to Heezen, who infamously dismissed this as “girl talk”. However, when they compared these V-shaped fissures with earthquake epicenter maps, Heezen couldn’t ignore the facts,” says the Google page dedicated to Ms. Tharp.

In 1957, Mrs. Tharp and Mr. Heezen jointly published the first map of the ocean floor in the North Atlantic. Two decades later, National Geographic published the first world map of the entire ocean floor, written by the two geologists, entitled “The World Ocean Floor”. In 1995, Mrs. Tharp donated her entire map collection to the Library of Congress. In celebrating the 100th anniversary of the Department of Geography and Maps, the Library of Congress named her one of the most important cartographers of the 20th century.