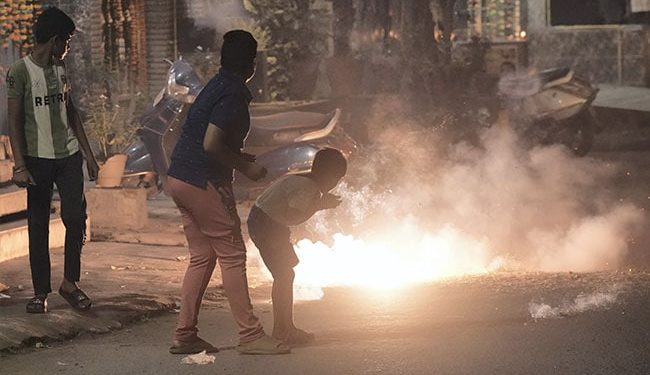 Air quality in Delhi turned ‘very bad’ this morning as people broke off fireworks in various parts of the national capital on Diwali night, defying the ban.

Loud blasts of fireworks thundered throughout Diwali night, exceeding allowable decibel limits making the air unbreathable. At dusk, people began cracking their fireworks, and as the night wore on, the intensity of the fireworks increased.

Delhi’s air quality index (AQI) stood at 323 at 6 a.m. today, a day after Diwali, according to the System of Air Quality and Weather Forecasting and Research (SAFAR). Also in neighboring Gurugram, Noida and Faridabad, air quality fell into the ‘very poor’ category.

However, according to the Central Pollution Control Board (CPCB), Delhi’s pollution level was its lowest in four years this Diwali with a 24-hour average AQI of 312. The national capital had registered an AQI of 382 last year; 414 in 2020 and 337 in 2019.

The Delhi government had banned the production, storage, sale and bursting of fireworks in this Diwali after taking into account the environmental and health risks associated with them. Those caught violating the ban would be fined and jailed for six months, the government had said.

Last week, the Supreme Court also refused to lift the fireworks ban in Delhi over pollution.

“How can we allow fireworks even if they are green crackers? Have you seen the pollution of Delhi?” the Supreme Court had asked – to reject BJP MP Manoj Tiwari’s plea against the Delhi government order.

The AAP government also banned the sale and use of fireworks last Diwali over concerns about alarming levels of air pollution.

In addition to fireworks, air pollution in Delhi during the Diwali period is exacerbated by stubble burning – a controversial practice – in neighboring states like Haryana and Punjab.