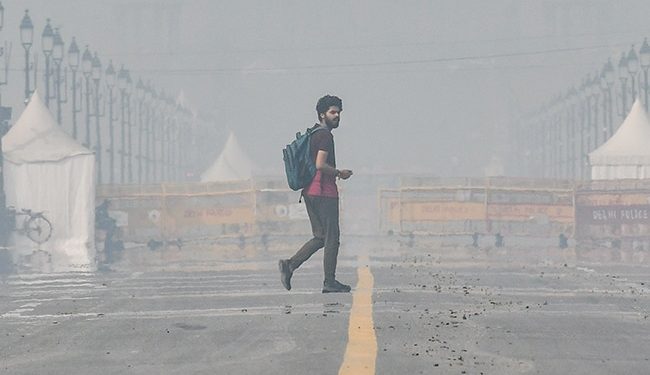 Air quality in Delhi has continued to decline even as the ruling Aam Aadmi party and the opposition blame BJP trade ahead of the civil body polls. The air quality index at 1 p.m. was in the 400-500 or “severe” range in various parts of the national capital.

With pollution levels at their highest since January, some areas in Delhi are hovering close to 500 in the index.

The concentration of PM2.5 (particulate matter up to 2.5 micrometers in diameter) is 40 to 60 times the annual safe limit of the World Health Organization.

The latest air quality forecast warns that it will deteriorate and remain in the “very bad” category for at least a few days, leading to health advisories.

Meanwhile, AAP workers protested in front of the Delhi Lieutenant Governor’s office today, alleging he deliberately disapproved of their “Red Light on, Gaadi Off” campaign aimed at reducing pollution. However, the LG has backfired, saying that AAP was “lying” about the campaign’s rollout date.

AAP has frequently attacked the lieutenant governor appointed by the union government, accusing him of acting in “political vendetta” at the direction of the Center’s ruling BJP and Prime Minister Narendra Modi.

Air quality in the wider National Capital Region has also deteriorated. At 1 pm Delhi had an overall AQI of 400, Faridabad 396, Greater Noida 395, Noida 390 and Ghaziabad 380.

Experts say the deterioration in air quality is due to wind direction and speed, which causes the build-up of pollutants coupled with an increase in incidents of farm fires.

Pollution around Diwali was the lowest in 7 years as weather conditions were a game changer. Air quality in the national capital began to deteriorate from October 24, and the AQI dropped from “poor” to “very poor” category.

Pollution levels rose on the night of Oct. 23 amid a drop in temperature and wind speed, people setting off fireworks and an increase in farm fires.

Pollutants will continue to come in from Punjab and Haryana, and the winds will be extremely calm, causing the pollutants to linger longer.