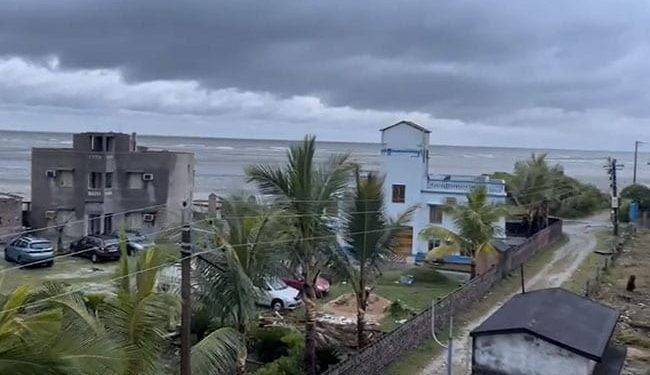 The weather department has forecast heavy rain and strong winds in West Bengal and the northeast as Cyclone ‘Sitrang’ intensifies and moves towards Bangladesh.

At 3:17 a.m. Monday, the cyclone was located 520km south of Sagar Island in Bengal and 670km southwest of Barisal in Bangladesh, according to the India Meteorological Department (IMD).

“Traveling north-northeast and further intensifying into a severe cyclone storm over the next 12 hours. Crossing the coast of Bangladesh between Tinkona Island and Sandwip,” the IMD said.

“It is very likely that it will continue to move north-northeast and further intensify into a severe cyclone storm over the next 12 hours. If it continues to move north-northeast after that, it is highly likely that it will hit the coast of Bangladesh. crossing between the island of Tinkona and Sandwip, close to Barisal around October 25 in the early morning,” it added.

The weather department has issued an advisory against offshore activities in the coastal areas of Bengal today and tomorrow. These districts are North and South 24 Parganas and Purba Medinipur.

The weather department’s advice predicted major damage to thatched huts, minor impact on roads and flooding in the affected areas.

The government has deployed civilian security forces to protect the riverbanks of South 24 Parganas and is also making arrangements to move people along the riverbanks to safer areas.

The weather department has also forecast heavy rain and high winds in the northeastern region.

Tripura is likely to be the hardest hit, with maximum rainfall expected to reach 200mm in 24 hours, the IMD said.

A “red alert” has been issued for Tripura, Assam, Mizoram, Manipur and Nagaland and an “orange alert” for Arunachal Pradesh.

The Tripura government has ordered all educational institutions to remain closed until October 26.

The National Disaster Response Force (NDRF) is standing by to handle any emergencies, officials said.