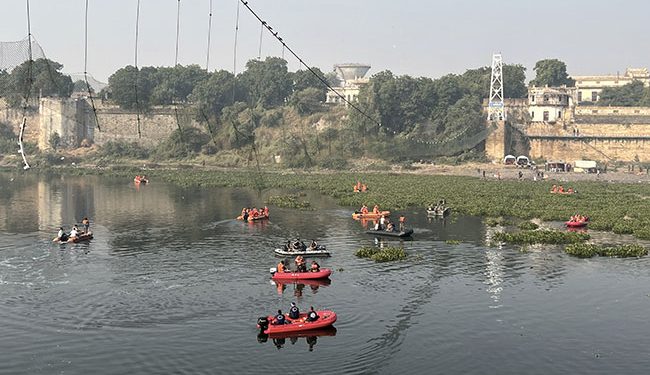 A court in Gujarat’s Mordi on Wednesday rejected bail applications from eight of the nine people arrested in connection with the tragedy of the suspension bridge collapse.

Chief District Court Judge PC Joshi said he will issue an order on the bail application of the ninth defendant, Devang Parmar, on Thursday.

Devang Parmar is a co-owner of Dev Prakash Fabrication.

Those arrested include Deepak Parekh and three others from the Oreva Group that operated the suspension bridge.

The prosecution argued against their bail requests and had filed a forensic lab report noting that the bridge had rusty cables, broken anchor pins and loose bolts, and that these and other issues were not addressed during the renovation.

The FSL report also pointed out that the metal floor laid during the renovation was getting heavier.

According to the public prosecutor, both repairers engaged by the group, which is mainly engaged in making clocks, were not qualified to carry out such work.

Orvea Group had hired Dev Prakash Solution from Dhrangadhra to renovate the bridge. It collapsed four days after it was thrown open to the public following renovations.

During the hearing, Deepak Parekh’s lawyer presented a purchase order issued by Oreva Group to Dev Prakash Solution stating “refurbishment will be (finished) after bridge dismantling”.

According to the first information report, there were at least 250 to 300 people on the bridge when it collapsed after one of the cables broke.

The Oreva Group would not have hired an expert agency to assess the load-bearing capacity of the bridge.

The group had sold 3,165 tickets on Oct. 30 alone, and there was no coordination between the ticketing offices on either side of the bridge, the prosecutor told the court.

The arrested booking agents should have stopped selling tickets, it claimed.