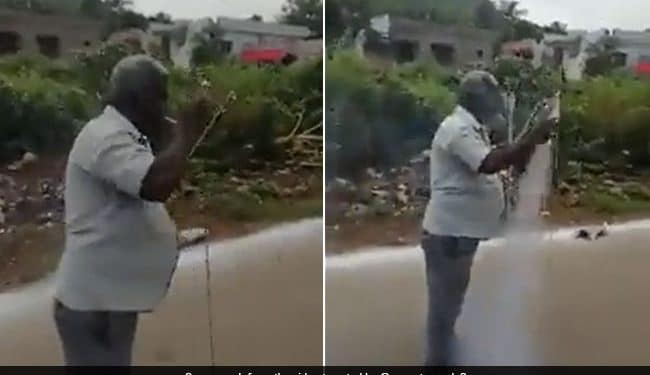 The video was shot in Andra Pradesh’s Visakhapatnam.

Ahead of Diwali, an old video showing a man’s unusual way of setting off fireworks, especially rockets, is going viral on social media again. The short clip was shared on Twitter by Indian Forest Service (IFS) officer Susanta Nanda. It showed a man launching multiple rockets with a cigarette between his lips.

“NASA’s founder was definitely from India,” Nanda wrote in the post, which garnered more than 962,000 views and more than 22,000 likes.

The founder of NASA was definitely from India pic.twitter.com/lbWlbjHB07

The 19 second video showed a man standing in the middle of a road, performing his incredibly daring act. As motorcyclists passed him, the man was seen lighting multiple rockets with the cigarette in his mouth.

The man launched not one but about 11 rockets in just 20 seconds, also without fear of being injured or burned.

In the comment section, while some internet users simply referred to the man as “Rocketman”, others suggested he be introduced to SpaceX CEO Elon Musk.

“No rocket launchers needed… position this guy,” one user wrote. “Maybe @elonmusk should be introduced to this man. This is how missiles are launched in some parts of India,” wrote another hilariously.

“World’s cheapest rocket launch. Hope @elonmusk check this out!” the third commented, while a fourth added, jokingly, “After seeing this Indian at Rocket competition, NASA may be embarrassed”.

The video is actually from 2018. According to previous reports, the video was shot in Visakhapatnam of Andra Pradesh.

Meanwhile, another old video showing a woman’s daring window-washing action had previously baffled internet users. The clip showed the woman climbing out of a window of her fourth-floor home and wiping the glass panel from the outside with a cloth. She was seen on the edge of the window panel without anything to support her.

The video first went viral in February this year and is said to be from a community in Ghaziabad.