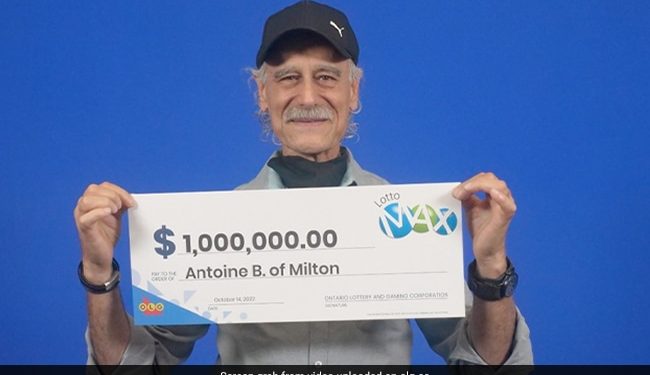 Luck is everything in the lottery, but it seems that some people are just luckier than others. Just 13 months after winning a $1 million lottery prize, a Canadian man from Milton, Ontario, has now won a $1 million Maxmillions jackpot.

According to the Ontario Lottery and Gaming Corporation (OLG), Milton resident Antoine Beaini won a $1 million Maxmillions jackpot on September 23.

The Milton Convenience Store on Main Street was the store where the winning ticket was purchased, according to the OLG.

According to the OLG, Ontario Lotto Max winners have taken home more than $7.3 billion since 2009.

Mr Beaini had won the same amount in a Lotto Max draw in August 2021.

According to an UNI report, Beaini told OLG officials about his latest win and that he couldn’t believe it. “I thought, ‘Again?’.” “It was more shocking than the first win. I told my wife and she was very happy.

Beaini said his latest win will enable him to provide for his family.

“I want to make sure the next generation of my family is comfortably furnished,” he said.

There is no shortage of people who keep trying their luck at lottery tickets.

A few days ago, a man from Maryland, in the United States, won a jackpot using the numbers of his own truck’s broken odometer, which was his third jackpot in 27 years.

Douglas Eck, 60, of Harford County, bought a 50 cent ticket from Royal Farms in Joppa for the Pick 5 draw on Oct. 14.