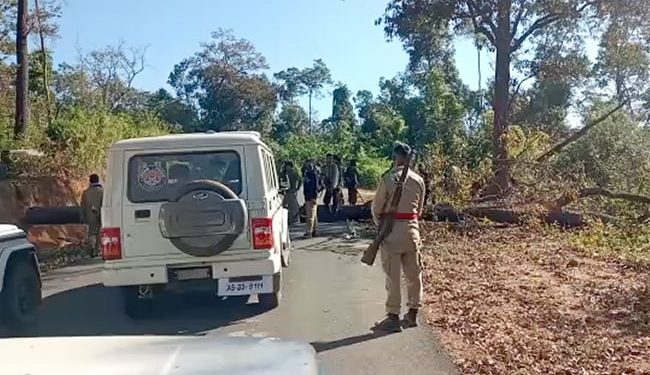 The Assam government said it will hand over the investigation to a central or neutral body.

Ahead of a meeting of Meghalaya ministers that met Union Home Minister Amit Shah, Assam Chief Minister Himanta Sarma announced in Delhi on Wednesday that his cabinet has decided to hand over the investigation into violence on the border of the two states to the CBI.

The cabinet meeting, quite unprecedented in Delhi, where state ministers had come to attend a central function in honor of Assamese medieval hero Lachit Borphukan, also asked the state police accused of killing five tribal villagers from Meghalaya on Tuesday to exercise restraint in dealing with problems or disturbances involving civilians.

At the special cabinet meeting, the Council of Ministers decided to issue a Standard Operating Procedure (SOP) for police and forestry personnel to deal with situations arising from disagreements with civilians.

“We have advised the police to limit the use of deadly weapons when dealing with the civilian population. SOPs for both police and forest personnel will be prepared to deal with such a situation. All police stations in charge will be properly way to be sensitized about such matters,” said Mr. Sarma. tweeted.

Earlier on Tuesday night, a cabinet meeting of Meghalaya decided to send a delegation of ministers led by CM Conrad K Sangma to a meeting with Union Home Minister Amit Shah on Nov. 24 to investigate a CBI or NIA investigation. to the violence that left six people, including five civilians of the state and an Assam border guard, killed on the eastern border of the state.

“We will officially inform him (Shah) about the shooting incident that took place in Mukroh village and demand that an investigation be launched by a central agency either NIA or CBI,” Sangma said after the cabinet meeting.

In a tweet in which Prime Minister Narendra Modi, Home Minister Amit Shah and Assam Chief Minister Himanta Sarma, Meghalaya CM Conrad Sangma, whose party is an ally of the BJP, complained on Tuesday that Assam police and forest rangers “entered Meghalaya and their resorted to unprovoked firing” on citizens of his state.

At the Assam cabinet meeting, ministers expressed deep concern and condolences over the deaths of six people and the injuries of several others in an “unfortunate police-civil conflict situation” in West Karbi Anglong district.

“Our cabinet has also decided to hand over the related police investigation to the CBI,” the chief minister of Assam said in a series of tweets after the meeting.

The state government also decided to ask Judge Rumi Phukan, a retired judge of the Gauhati Supreme Court, to conduct a judicial inquiry into the circumstances leading up to the incident, he added.

The judicial investigation will be completed within 60 days, Sarma said.

Earlier in the day, Meghalaya Assembly Leader Mukul Sangma on Wednesday described the killing of unarmed villagers, allegedly by Assam police, as a “matter of genocide” and demanded action against the perpetrators.

Mr. Sangma, Trinamool Congress leader and former prime minister, visited Mukroh near the disputed border between Assam and Meghalaya where six people were killed and met the families of the victims.

“The incident took place well within the jurisdiction of Meghalaya State. From the input I received from Ground Zero, it is an appropriate case of genocide,” he said.

Violence had erupted on the border between the two states in the early hours of Tuesday after a truck reportedly loaded with illegally harvested timber was intercepted by Assam forest rangers. Six people, including five tribal villagers from Meghalaya, an Assam forest ranger, were killed.

Following this, a group of tribal villagers from Meghalaya allegedly vandalized and set fire to a forestry office in West Karbi Anglong district of Assam, sparking fears that the spiral of violence would spread in the two states.

At least two vehicles — one in the village of Mukroh where the violence took place on Tuesday and another in Shillong, the capital of Meghalaya — were set on fire by a mob, officials said. Members of the student union held demonstrations at Lalong Civil Hospital, where the bodies of all six people were brought for autopsy and demanded that those responsible for the murder be handed over to the Meghalaya police.

Following reports of attacks on vehicles from Assam passing through Meghalaya, the Assam police set up barricades at several border crossings and asked people not to travel to the hill state in vehicles with Assam number plates.

“Since yesterday, we advise people not to go to Meghalaya until the situation is fully normalized. We only ask the private and small car owners not to travel, as miscreants are targeting such vehicles there,” Deputy Commissioner (East) of Police of Guwahati Sudhakar Singh told PTI.

However, Singh said that the commercial vehicles have not stopped as of now. Some taxi drivers, returning to Guwahati on Tuesday night and Wednesday morning, said Meghalaya police escorted them to the border, yet their vehicles were stone-pelted by onlookers as they drove.

Both Meghalaya and Assam also announced an ex gratia of Rs 5 lakh each for the relatives of the deceased.

A team of Meghalaya ministers will meet Union Home Minister Amit Shah on November 24 to seek a central agency inquiry into the matter.

However, the Assam government said it will hand over the investigation to a central or neutral body.

The Himanta Biswa Sarma government in Assam also said it handed over the district SP and suspended the commander of Jirikinding police station and Kheroni range ranger.

The two states have a long-standing dispute in 12 areas along the 884.9 km long interstate border, and the location where the violence took place is one of them.

The two northeastern states had signed a memorandum of understanding in March this year in the presence of Shah in New Delhi to end the dispute in six of them.

Meghalaya was carved out of Assam in 1972 and had since challenged the Assam Reorganization Act of 1971 which demarcated the border between the two states.