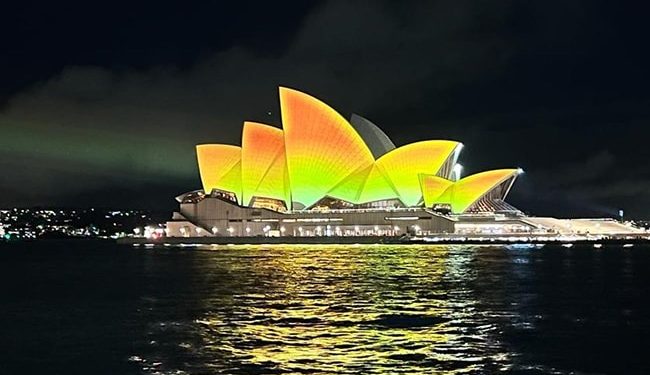 As Indians around the world got into the festive spirit to celebrate Diwali, members of the Indian cricket team, who are currently in Australia to participate in the ICC T20 World Cup, ushered in the festivities in Sydney.

After India defeated Pakistan in a thriller, thanks largely to a reckless undefeated 82 by former captain Virat Kohli, in their opening game of the tournament in Melbourne last night, the Indian team traveled to Sydney for their next game against the Netherlands on Thursday.

Commenting on India’s stunning victory over arch-rival Pakistan in Melbourne and how Sydney was all set to enjoy the festival of lights, the Indian Consulate in Sydney tweeted today: “After a Viraat Sunday, Sydney got ready to witness grand Diwali.”

After a Viraat Sunday, Sydney was all set to see Grand Diwali! Celebrations begin lighting iconic @SydOperaHouse in crimson. Thanks Hon. @Dom_Perrottet & @markcourelive for this great gesture!@IndianDiplomacy@MEAIndia@HCICanberra@DrSJaishankar@BCCIpic.twitter.com/xoecyEMNJe

To mark the occasion, the iconic Sydney Opera House was lit up in crimson today.

Kohli delivered his Diwali greetings, tweeting today: “A very happy Diwali to all of you. May the festival of lights bring you peace, joy and prosperity.”

Happy Diwali to all of you. May the festival of lights bring you peace, joy and prosperity. 🪔

The festivities kicked off in Sydney on Saturday and will continue through Wednesday. Sydney, like most major Australian cities, has a large presence of South Asians and a significant number of Indian expats for whom Diwali is the biggest festival on the calendar.

During Virat Kohli’s “Innings Of A Lifetime”, UPI transactions took a hit

“United, Work for the Good of the Nation”: Rishi Sunak’s First Message to Party Leaders

"United, Work for the Good of the Nation": Rishi Sunak's First Message to Party Leaders