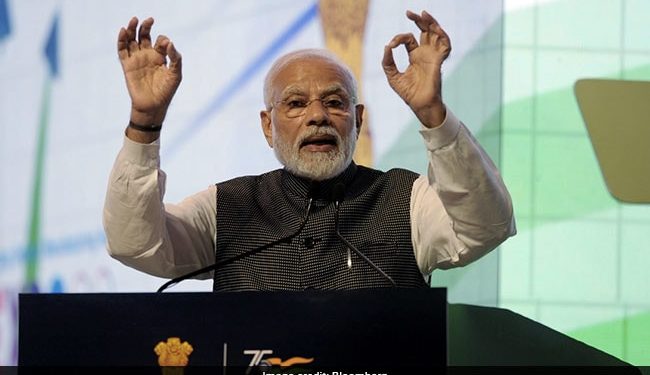 Last week, at the opening of a new aircraft factory in western India, Indian Prime Minister Narendra Modi returned to a slogan he coined a few months after taking power in 2014: “Make in India”. This time, however, he added, “Make for the world.”

This is not the first time Modi has pointed to India’s need to increase exports of industrial products. Still, the rhetorical emphasis is welcome, as India’s pitch to investors has typically focused on the size of its domestic market rather than how easy it is to set up a shop and export from the country.

That’s partly because it’s not quite as simple as it should be yet. The factory that Modi inaugurated will make Airbus SE’s C-295 military transport in collaboration with the Tata Group. While India has pledged to buy 40 aircraft, no export deals have been announced. And the government boast that most of the aircraft supply chain is in India (underlined by Tata Sons Ltd.

Chairman Natarajan Chandrasekaran’s claim that the company would “take aluminum bars at one end of the value stream and turn it into an Airbus”) reveals that Indian decision-makers still do not understand the nature of modern, decentralized supply chains.

In fact, the controversies surrounding the Tata-Airbus deal — and in particular its location in Modi’s home state of Gujarat — reveal how India’s latest plans to become a manufacturing superpower could struggle.

India as such has no real industrial policy. What it has instead is multiple government schemes, which cost around Rs. 2 trillion, for “production incentives” or PLIs. These are basically subsidies or special treatment for major investments in certain sectors – 14 of them, at the latest.

Some of these target sectors have clear strategic value, including semiconductors, solar panels, mobile phones and batteries. Others are clearly chosen because many people will be employed, for example textiles. And some are just areas where India has done well in the past, such as auto parts. Given this confused list of priorities, it is not surprising that several other sectors are also lobbying for subsidies.

The PLI programs don’t quite achieve that. For example, one of the sectors targeted by stimulus measures was specialty steel. Government support for happy steelmakers came with built-in production and export targets. Yet a few months after the targets were set, the same government unexpectedly introduced an export tax on those same steel products. It is difficult to sell PLIs as a sign of government involvement after such confusion.

The other reason that PLIs work to some extent is that companies hope that the subsidies will significantly reduce investment in a particular sector. It is common for foreign investors in India to do business with a local partner; A government that says it will put millions into your factory is the best partner of all, right? Once the central government has a stake in a particular project, some of the obstacles to doing business in India – meddling bureaucrats, political vagaries, obstructive regulators – can be removed.

What we have seen, however, is that government is not exactly a silent partner. Until recently, most observers had the impression that the Tata/Airbus project would be located in the state of Maharashtra. The news that it would go to Gujarat instead sparked a political squabble. A former state minister claimed the companies told local officials they had no choice in where to settle – the location would be up to Modi’s government.

Tempers in the two states were short, in part because this came very quickly after Maharashtra lost another, even bigger PLI project – an ambitious chip manufacturing plant set up by Foxconn and Vedanta – to Gujarat. Here again, the preferences of the central government — which has set aside up to $10 billion for semiconductor subsidies — would likely have been crucial.

Modi has often spoken of “cooperative competitive federalism” – the idea that Indian states would compete freely for investors and raise each other’s standards in the process. However, when it comes to PLI choices, New Delhi seems to have a thumbs up.

A real commitment to export-led production growth would require greater confidence in investors. The government should spend less on subsidies, but ensure that investors can freely choose where and how they operate. The PLI scheme could bring India one or two success stories, for example in mobile phones. But unless accompanied by a shift in government mindset, India will not be the next China.

(Mihir Swarup Sharma is a fellow at the Observer Research Foundation.)

Disclaimer: These are the personal opinions of the author.

How Deepika Padukone and Ranveer Singh lit up the award ceremony