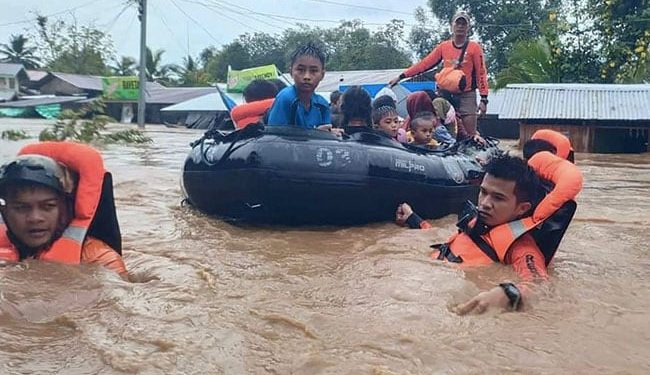 The death toll from a storm that ravaged the Philippines has risen to 98, the national disaster agency said Monday, with little hope of finding survivors in the worst-hit areas.

Just over half of the fatalities resulted from a series of flash floods and landslides caused by Tropical Storm Nalgae, which devastated villages in the southern island of Mindanao on Friday.

Mindanao is rarely affected by the 20 or so typhoons that hit the Philippines each year, but storms that reach the region tend to be more deadly than in Luzon and the central parts of the country.

“We have shifted our operation from search and rescue to salvage because the chances of survival after two days are close to zero,” said Naguib Sinarimbo, head of civil defense for the Bangsamoro region of Mindanao.

The number of fatalities is likely to rise, with the national disaster agency recording 63 people still missing and dozens more injured.

The Philippine Coast Guard posted photos to Facebook showing staff in the ruined village of Kusiong, in Mindanao’s Maguindanao del Norte province, wading through thick, thigh-high mud and water, and using long stretches of wood to search for more bodies.

Kusiong was buried by a massive landslide, which created a huge pile of rubble just below several picturesque mountain peaks.

Meanwhile, the survivors faced the heartbreaking task of cleaning up their sodden homes.

Residents shoveled mud from their homes and shops after piling up their furniture and other belongings on the streets of Noveleta Municipality, south of the capital Manila.

“In my entire life of living here, it’s the first time we’ve experienced this kind of flooding,” said Joselito Ilano, 55, whose home was flooded by medium-high water.

“I’m used to flooding here, but this is just the worst, I was taken by surprise.”

Perfidia Seguendia, 71, and her family lost all their belongings except for the clothes they were wearing when they fled to their neighbor’s two-story house.

“Everything was under water – our fridge, washing machine, motorcycle, TV, everything,” Ms Seguendia told AFP.

“All we could do was cry because there’s really nothing we can do about it. We couldn’t save anything, just our lives.”

More rain on the way

President Ferdinand Marcos began exploring some of the hard-hit areas on Monday, including Noveleta, as aid groups rushed food parcels, drinking water and other aid to the victims.

“Although the disaster was huge, the number of casualties was not that high, although there is a lot of damage to the infrastructure,” he said.

Nalgae flooded villages, destroyed crops and cut power in many regions as it swept across the country.

It referred to an extended weekend for All Saints’ Day, which is Tuesday, when millions of Filipinos travel to visit the graves of loved ones.

Scientists have warned that deadly and destructive storms will become more powerful as the world warms due to climate change.

The state’s weather forecaster warned that a new tropical storm was headed for the Philippines even as Nalgae crossed the South China Sea.

As of Wednesday, the new weather system could bring more heavy rain and misery in the southern and central regions hard hit by Nalgae.

Landslides and flash flooding, originating from largely deforested mountain slopes, have been among the deadliest storms in the Philippines in recent years.