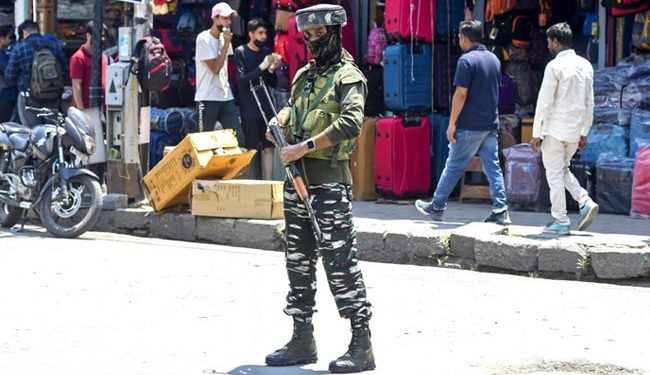 About 300 terrorists are present in Jammu and Kashmir, while 160 others are waiting on the launch pads for a chance to sneak in from across Pakistan’s Line of Control (LoC), a top army commander said on Tuesday.

However, Lieutenant General Upendra Dwivedi, Commander-in-Chief of Northern Command, said that the security situation in Union territory has changed dramatically following the repeal of Article 370 in August 2019 and terrorist activities have largely been controlled.

“About 300 terrorists are present in the length and breadth of Jammu and Kashmir, but we are making sure they cannot take any action,” the army commander told reporters on the sidelines of the platinum anniversary of the historic ‘Poonch Link-up Day’. ‘. here.

The Platinum Jubilee of Poonch Link-Up Day, on the occasion of the ‘Operation Easy’ carried out by the Indian Army in 1948 to defend the border area against the Pakistani raiders, was celebrated with traditional merriment and fervor by the people of Poonch and the military.

“According to our records, 82 Pakistani terrorists and 53 local terrorists are active in the hinterland, while the concern is the criminal activity of 170 others who have not been identified,” he said.

“As for the Indian Army, it will carry out any order of the Government of India. We are always ready,” he said.

Speaking at an infantry day celebration in Srinagar on October 27, the defense minister had said that people of PoK are victims of human rights abuses and that Pakistan must pay a price for it. He said that the Indian government is determined to implement the 1994 resolution passed in parliament on taking back the part of Kashmir “under illegal occupation of Pakistan”.

Regarding the security situation in Kashmir, the army commander said that it has undergone a major change following the repeal of Article 370 and that the civilian administration is doing an excellent job of ensuring peace and development and ensuring that terrorism is put in the background.

“All the trend lines that were there are going down (after the repeal of Article 370), to that extent, and today peace and development are at the center and there is a great scope to meet the aspirations of the people. civilian government is doing a great job of taking that space and making sure that terrorism is put on the back seat,” he said.

When asked if terrorism is under control, he replied, “Yes, to a large extent.” However, he denounced the targeted and selective killings saying it shows Pakistan’s frustration.

“The people from outside the neighboring country are using other means like smuggling guns, grenades and drugs to carry out petty actions – targeting innocent and unarmed persons who have come here to make a living and support the Kashmiris ,” he said.

The army commander said it is very sad that such incidents take place, but the police, security forces and citizens have joined hands and decided that they will not allow such acts.

“Whatever happens, it is very little and efforts are being made to further reduce this type of incident. Anyone who indulges in this type of wrongdoing will receive appropriate responses,” Lt. Gen. Dwivedi said.

Referring to Pakistan, he said that when nothing was achieved by sending big guns and raising the Kashmir issue to UN, OIC (Organization of Islamic Cooperation) and other countries, they went for this kind of action such as attacking the innocent and sending small arms and drugs. .

“Drugs worth Rs 45 lakh were seized in Baramulla (North Kashmir) along with other weapons and grenades. Similarly, huge amounts of drugs are seized in other border areas. Terrorists are killed but they say you kill smugglers , meaning they admit to sending drugs. It is very wrong from part of Pakistan,” he said.