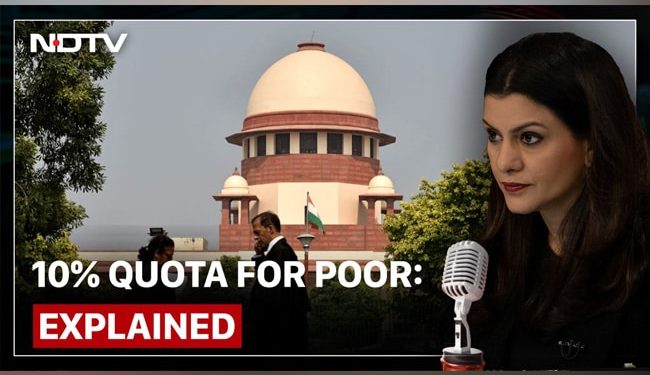 Hi, this is Hot Mic and I’m Nidhi Razdan.

This week, the Supreme Court delivered a groundbreaking 3-2 ruling that will have a huge impact on reservations in government jobs and in higher education institutions. So what does it actually mean to you and me?

Let’s try to understand the verdict first. The court maintained a 10% quota for economically weaker sections, which the government passed the 103rd Amendment in January 2019. The amendment was immediately challenged, and that challenge was referred to a 2020 constitutional bench of five judges in August, which has since ordered it. However, economically weaker sections will not include the poor among SCs, STs and OBCs as they are already covered by a separate quota. In other words, the amendment that changed the Constitution and introduced a quota for the poor among the so-called “forward castes” or “general category” is what this is. Once it was passed, there were also rules reported by the center and under that 2019 report a person who was not under the SC, ST and OBC reservation schedule and whose family had a gross annual income of less than eight lakh rupees, had to be identified as EWS for reservations.

Now the notification excluded those from the EWS category if their families own certain specified assets. So what was the main argument for challenging this quota? Well, those who went to court against it said that it violates the basic structure of the Constitution in the first place, because the Constitution guarantees special protection only to socially disadvantaged groups, and the amendment deviates from it by providing special protection. to promise on the sole basis of economic criteria. They had cited the Supreme Court’s own ruling in the Kesavananda Bharati case in 1973, which stated that certain aspects of the Constitution simply cannot be changed. However, the three judges who maintained this amendment and thus the 10% quota did not agree. Judges Dinesh Maheshwari, Bela Trivedi and SB Pardiwala said the basic structure of the constitution was not violated. For example, Judge Trivedi ruled that treating the EWS or the economically weaker sections as a separate class is a reasonable classification, and that treating unequals equally would violate the principle of equality under the Constitution. But interestingly, the outgoing Chief Justice of India, UU Lalit, was one of two judges on the bench who disagreed. Judge Bhat was the other to rule that while subject to economic criteria is not per se contrary to the Constitution, excluding SCs, STs and OBCs is contrary to the basic structure.

Justice Lalit said he agreed. Now, the Supreme Court’s ruling upholding the quota also appears to have knocked down a 50% cap on reservations, which the court itself imposed by the Indra Sawhney judgment of 1992. Now, based on that, a number of states are attempting to open reservations. to specific groups have been precipitated over the years and many of these issues will now be reopened. There has also been a lot of controversy over the eight lakh rupee limit for determining who was poor. Now, in October 2021, the Supreme Court asked the government, how did you achieve this number? So the center said it would set up a committee to look into this figure in detail. Now, in January this year, the committee’s report was accepted by the government and stated that the annual income of eight lakh rupee was a reasonable limit for determining who is poor, but also said that the EWS category, regardless of the income, can exclude a person whose family has five acres of farmland and more. Interestingly, by the way, government data shows that 95% of Indian households earn less than eight lakh rupees per year. So what’s all this going to mean on the ground and what does the reservation pie look like right now?

Scheduled Castes have 15% reservation Scheduled Tribes 7.5% OBCs 27%. And now you have economically weaker sections at 10%. It is not just government institutions, private educational institutions could also be forced to implement this quota as well. Now most political parties have welcomed the order of the highest court. The BJP wants to gain politically from the upper-caste poor without disrupting backward caste quotas. But there is also a growing demand for a national caste census by parties like the RJD and the JD(U) to establish new criteria for reservations for backward groups – something the BJP has opposed. So this could open a Pandora’s box and the DMK is one of the main opposition parties that has opposed this quota for the poor from the start, saying it violates the basic principles of reservations. So how will this all go from here? View this space.